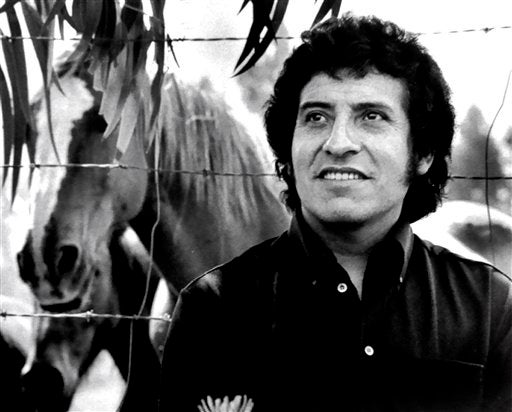 This undated file photo released by the Victor Jara Foundation shows Chilean folk singer Victor Jara, who was killed in the opening days of the dictatorship of Gen. Augusto Pinochet. AP

A judge in Santiago charged former military officers Hernan Chancon Soto and Patricio Vasquez Donoso with taking part in the Sept. 15, 1973 killing. He also charged ex-army prosecutor Ramon Melo Silva as an accomplice. They join a list of eight former army officers who were charged in late 2012 and early 2013 in the killing of the communist singer and songwriter.

“This decision has to be celebrated and we hope this investigation can continue,” Jara’s widow, Joan Jara, said at a press conference. “We know this marks a milestone.”

Jara, whose songs tackled social and political issues, was swept up with thousands of other supporters of socialist President Salvador Allende during a military coup led by Gen. Augusto Pinochet.

Last year, Jara’s family filed a civil lawsuit in the United States accusing former Chilean army Lt. Pedro Barrientos Nunez of ordering soldiers to torture the singer. The lawsuit also said Barrientos personally fired the fatal shot while playing a game of “Russian roulette” inside a locker room in Santiago’s Estadio Chile, where some 5,000 supporters of Allende were being detained.

Barrientos, who left Chile in 1989 and is living in the U.S., is part of the group of officers who also face criminal charges in Chile related to the singer’s killing. Barrientos has denied all involvement, saying he wasn’t there and didn’t even know who Jara was at the time of the coup.

The government estimates 3,095 people were killed during Pinochet’s rule, including about 1,200 who were forcibly disappeared.

About 700 military officials still face trial in Chile and about 70 have been jailed for crimes against humanity.