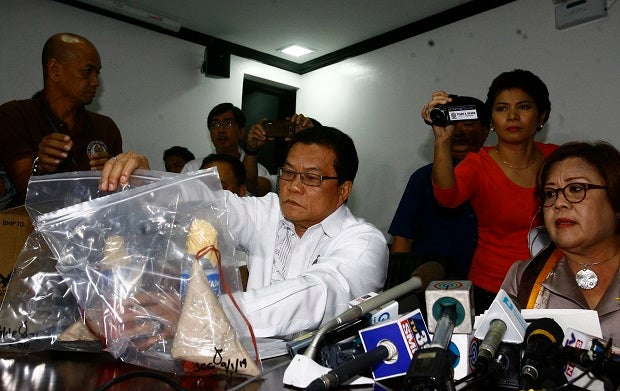 MANILA, Philippines—The head of the National Security Council said on Wednesday the group behind the aborted attempt to detonate explosives at the Ninoy Aquino International Airport was no threat to national security, but nevertheless posed a threat to public safety.

NSC Director General Cesar Garcia told the Senate committee on finance that the USA Freedom Fighters of the East or USAFFE was one of the organizations that had been classified as “dubious” by the intelligence community.

“It’s not a threat to national security, Mr. Chairman, it’s not,” Garcia said on Wednesday, when asked by Sen. Francis Escudero on whether the group posed a threat to the country’s security and way of life.

But Garcia later told reporters that USAFFE did pose a threat to public safety, as he noted that the National Bureau of Investigation found they had plans to deploy incendiary devices.

He also did not think the USAFFE could be considered a terrorist group, noting that the Human Security Act has stringent provisions for defining a terrorist organization. He believes USAFFE does not fall under the classification defined in the law.

He said he had an idea of the person behind the USAFFE, but declined to reveal this, adding that he would rather let the NBI discuss the matter.

Garcia said there had been a time when such dubious organizations were being followed closely. But when the 1987 freedom constitution came about, there was greater tolerance for freedom of association, he said.

“That’s why sometimes, these kinds of organizations led by delusions and by delusional individuals are able to escape notice and they started getting involved in this activity,” he said during the Senate hearing.

He also said groups such as this one would come in and out of security officials’ radar screens from time to time.

At one point, the group staged a rally in favor of the Visiting Forces Agreement in front of the US Embassy, he noted.

“So they do come once in a while to our attention. But at the time they looked basically harmless,” he added.

Garcia was at the Senate for the hearing on the NSC’s P95.389-million budget, which met with no opposition during the finance committee hearing on Wednesday.

The NSC is the principal advisory body on the proper coordination and integration of plans and policies affecting national security.

The NBI earlier arrested alleged members of the USAFFE who reportedly planned to detonate explosives placed in a vehicle parked at the NAIA, supposedly to draw the President and the Filipino people’s attention to China’s actions in disputed waters.

The group also allegedly had plans to set off explosives at a popular shopping mall.

De Lima: Naia 3 was one of four bomb targets

Read Next
Nancy Binay pokes fun at her father
EDITORS' PICK
Being a celebrity isn’t wholly an ‘advantage’ in the election, says Sotto
Acer starts the year off strong with the Aspire Vero National Geographic Edition
Octogenarian jailed for ‘stealing mangoes’ freed after people chip in for bail
Gov’t eyeing COVID-19 tests in pharmacies
Gear up and get ready to play with Yamaha Mio Gear
Over 3 Million worth of prizes to be won at Smart Padala’s SENDali Manalo Promo!
MOST READ
Imelda Marcos trends on Twitter after octogenarian jailed for allegedly stealing mangoes
Natural immunity more potent than vaccines during US Delta wave—study
Help pours in for octogenarian jailed for ‘stealing’ mangoes in Pangasinan
Bongbong Marcos-Sara Duterte tandem adds Zubiri, Gadon, Marcoleta to Senate slate
Don't miss out on the latest news and information.