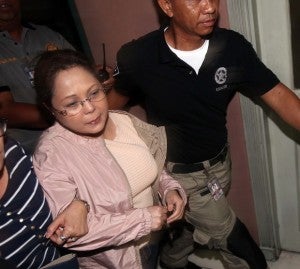 MANILA, Philippines—Pork scam suspect Atty. Jessica Lucila “Gigi” Reyes on Tuesday asked the Sandiganbayan to allow her to undergo a check-up for her facial spasm, which she got after banging her head to the wall.

In a motion filed before the anti-graft court on Monday, Reyes’ counsel said she suffered an anxiety attack, which caused her to hit her head against the wall on August 5.

On August 17, Reyes suffered from “intermittent spasms of right eye lid and cheek” as well as “slurring of speech” with “slight deposit of saliva on right lip,” the motion said.

Reyes’ neurologist Dr. Martesio Perez said her “right hemi facial spasm” might be caused by a “pressure on the facial nerve by a tumor or an artery.”

Reyes is the resigned chief of staff of Senator Juan Ponce Enrile. Both are accused of plunder in the pork barrel scam, the alleged diversion of public funds to ghost projects for kickbacks under the scheme of Janet Lim-Napoles.

Reyes had surrendered to the Sandiganbayan, and was eventually brought to the Bureau of Jail Management and Penology female dormitory in Camp Bagong Diwa.

She was once rushed to the hospital after claiming to be suffering from mixed anxiety disorder.

Gigi Reyes breaks down at arraignment