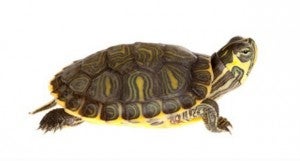 BEIJING–Of course you’d want to take your pet with you anywhere you go. Not on the plane to travel with you though.

Airport security in Guangzhou Baiyun International Airport seized a turtle hidden in the underwear of an eight-year-old boy, the China Daily reported.

The boy hid the turtle after his grandmother warned pets were not allowed in air travels, it said.

Stringent security checks at the airport foiled the boy’s travel plan for his turtle, which was seized by security officers but on the promise they’d take care of it until it was picked up by his parents.