Drilon on receiving P1B from DAP: A blatant lie 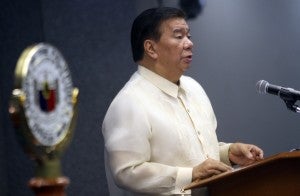 “That is a blatant lie, and I will not dignify these characters with a response. If you look at it, these are pure speculations and I would like to caution that we should not give credence to these speculations as it does not help our already toxic political environment,” Drilon told reporters.

He was reacting to claims by Navotas Rep. Toby Tiangco and Abakada Rep. Jonathan de la Cruz that he (Drilon) had cornered P1 billion in DAP allocations for his pet projects in Iloilo province.

Voting 13-0, the Supreme Court on July 1 threw out some provisions of the DAP, a mechanism introduced in 2011 by the executive branch whereby pooled savings are used to fund vital projects.

Some P237.5 billion in savings were pooled from 2010 to 2013. Some P167 billion was approved by the President but only P144.34 billion was released under the DAP. The balance was to be used to bring down the deficit, Budget Secretary Florencio Abad told the Senate in late July.

Abad said he believed that most of the DAP projects had been implemented, but admitted that the executive branch was at a loss over how to proceed, such as with paying contractors, because the high court was unclear on this.

Otherwise, lawmakers, even those from the opposition and party-list groups, proposed projects funded by the DAP, Abad said.

Meanwhile, Drilon said that effective on Monday, he was enforcing the Sandiganbayan order suspending Sen. Juan Ponce Enrile for 90 days pending his trial over the P10-billion pork barrel scam.

“I have no recourse but to implement this, as we received the order of the Sandiganbayan denying the motion for reconsideration of Senator Enrile,” Drilon said.

He said he would do the same in the case of Sen. Jinggoy Estrada if he received a similar order from the antigraft court. The Sandiganbayan has also denied Estrada’s motion seeking a reconsideration of his suspension.

Enrile, Estrada and Sen. Bong Revilla were indicted over the pork barrel scandal.

“When they are suspended, they have no pay,” he said. “The staffs are employees of the Senate, they are not affected.”