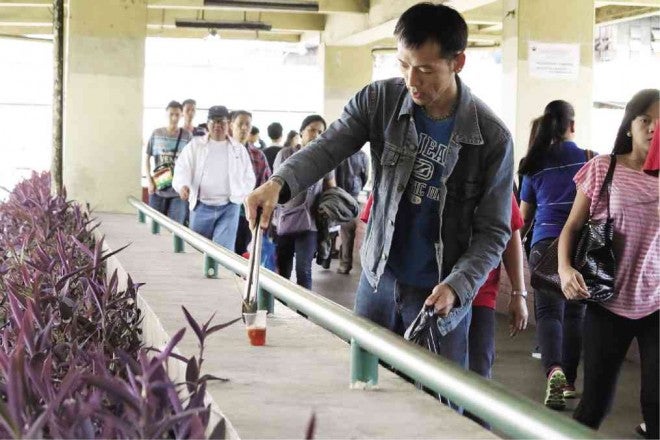 MASAKAZU NOSE spends each morning picking up litter along the concrete walkways of Baguio City. People in the city pay him no attention when he works, often ignorant about the help he provides to the bustling upland metropolis.EV ESPIRITU/ INQUIRER NORTHERN LUZON

BAGUIO CITY—Older generations have been saying that the Baguio they loved was no longer the city that exists today.

But what drew migrants to the summer capital continues to attract present generations, even foreigners.

And some of these foreigners love the mountain resort so much they have contributed to its upkeep, anonymously.

Few people pay attention to Frank Georg, a German, when he trims hedges at the Post Office park in front of the Baguio Cathedral, or cleans the City Hall grounds each day.

People also don’t pay attention when they see Japanese Masakazu Nose when he picks up garbage in areas near the market.

Another Asian man sweeps portions of Teachers’ Camp on sunny days while a Caucasian has been observed feeding stray dogs near Wright Park.

These volunteers have not been counted among Baguio’s outstanding citizens, but they are valued by some government employees, who welcome the help they offer.

Carlo Alafriz, who supervises the maintenance of street side gardens for the City Environment and Parks Management Office (Cepmo), said he is happy that Georg is around.

“This man is good. His work ethic is commendable,” he said.

Georg, 55, said he intended to stay in Baguio for only three months but he said the American-built mountain city inspired him to stay for the last 18 years.

The Inquirer first encountered Georg when he contributed photographs and Biblical paintings to the Baguio Cathedral. These images have been reproduced and displayed along the cathedral’s staircase that leads to Session Road.

He started cleaning and landscaping the Post Office Park in 2010. He goes to the park wearing garden boots and armed with gardening tools, rubbing alcohol and insect repellant.

Georg did not volunteer much about his life in the city or how he makes a living. But he said he trained in a gardening school, having grown up in a farm and a garden center built by his parents in the northeastern part of Frankfurt.

The farm was also where he was infected with wanderlust, Georg said. His father, he said, used to teach him about the world using a globe and geography books.

Georg said he traveled to countries like Turkey, Egypt, Brazil and China, before settling in Baguio.

“You feel safe here,” he said, especially when Baguio residents invite him to sit with them and partake of “rice with baboy (pork), manok (chicken), and sayote.”

Georg said his training did not prepare him for Philippine plants so he spends his free time learning about local plants at the Baguio Orchidarium.

“I go to the Orchidarium and borrow some books to know what is [a] palm tree, what is [a] banana plant. I have many books about tropical plants. From time to time I look [at these resources],” he said.

Alafriz said the Post Office park improved with Georg’s help, and street vendors, who sell near the park, have started to become conscious about littering.

Because he is not a paid employee, Cepmo occasionally gives Georg cash for transportation and a snack.

Nose, 40, was timid when the Inquirer spoke to him about his daily task of cleaning the city’s pedestrian overpasses. He runs a small food stall at a local mall near the Baguio public market.

But every morning, between 9:30 and 10:30 a.m., the Japanese would wander around the pedestrian bridges that links the market to Magsaysay Avenue, Abanao Street and lower Session Road, carrying a large black garbage bag and a pair of tongs.

Nose uses this device to pull out plastic containers, coffee cups, food wrappers and other trash dumped by people.

Nose, who had difficulty speaking in English, said he is originally from Tokushima, where he managed a restaurant.

But asked why he volunteers to clean up downtown Baguio, Nose said: “No reason. I just have little free morning time.”

Nose said he grew up in Japan, which is known for its sanitation and social order.

“I hope Filipinos don’t throw away garbage,” he said.

Nose said he traveled to the city in April to learn English, but has been spending extra time picking up street litter.

Nose said he started cleaning the overpasses a month ago.

“Very few Filipinos tell [me] you are good [for helping clean up the city],” he said, then Nose stressed that it was not what he wanted. The Japanese said he did not want to attract attention.