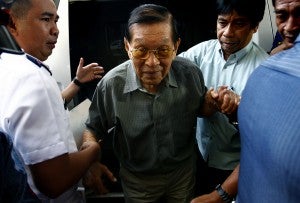 MANILA, Philippines—The Senate on Monday implemented the 90-day preventive suspension order of the Sandiganbayan against detained Senator Juan Ponce Enrile, who has been charged with plunder in connection with the pork barrel scam.

Drilon said the Senate had no other recourse but to implement the order of the anti-graft court.

“The suspension will be effective (Monday), and the suspension will be automatically lifted after 90 days. This is the order of the Sandiganbayan and we have no recourse but to implement it, consistent with the decision of the Supreme Court in the case involving a member of the legislature,” said the Senate leader.

The 90-year-old lawmaker was ordered suspended by the Sandiganbayan on July 25, siding with the prosecution’s motion that he might intimidate witnesses or tamper evidence while he is senator.

Drilon said that while under preventive suspension, Enrile could not file bills, sign a committee report, and would not receive his salary.

Enrile’s staff members, on the other hand, would not be affected by his suspension.

(His staff members are employees of the Senate so they are not affected.)

Two other detained senators—Jose “Jinggoy” Estrada and Ramon “Bong” Revilla Jr.— have also been ordered suspended by the Sandiganbayan, but Drilon said the Senate has yet to wait for the court’s final ruling.