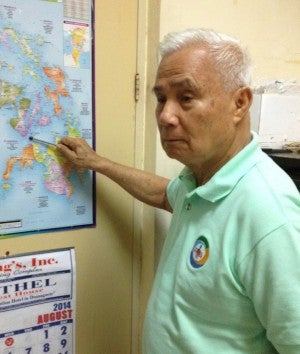 DUMAGUETE CITY, Philippines—Over the past 62 years, the scientist has been reporting for work in a small office named after him at Silliman University here.

Now 84, Dr. Angel C. Alcala, a marine biologist and Fulbrighter, remembers the day in 1988 when he was “fired” by the president of Silliman after 37 years of service. “He said I was too old to teach, but I was still very young,” he says, laughing.

As chair of the university’s Angelo King Center for Research and Environmental Management, Alcala, assisted by a team of scientists, is working on the interrelationships of marine protected areas, a subject close to his heart.

The passion won him two major awards—the Ramon Magsaysay Award for Public Service in 1992 and the National Scientist Award in 2014.

Alcala believes that scientists are made, not born. In fact, being a scientist was farthest from his mind when he was growing up in Barangay (village) Caliling in Cauayan town, Negros Occidental province.

“I was just playing like all the other boys,” he says.

But apart from living next to a reef, Alcala saw sparks in the marine environment, inspired by the picture in a magazine of a reef that, to him, represents the ideal reef.

“I was looking at all these ecosystems and began to wonder why they were there and how they were interacting,” he says.

After graduating from Kabankalan Academy in now Kabankalan City, Negros Occidental, Alcala went to Silliman and started to study reefs.

The years of data gathering paid off when, after traveling for three weeks on a steamship to San Francisco under a Fulbright/Smith Mundt graduate scholarship at Stanford University in 1959, he was able to finish his master’s degree in just one year.

“I had all my data with me and all I did when I got to Stanford was just to write my thesis,” Alcala says.

He returned to his teaching job at Silliman. Four years later, however, he had to leave his wife, Naomi, and their six children a second time and spent two years pursuing a Ph.D. in Biological Sciences at Stanford.

Alcala is also one of only two herpetologists in the Philippines. He attributes the scarcity of scientists who study reptiles and amphibians to the fact that people are scared of reptiles.

“They find them ugly and dangerous creatures, but I’d say this is just a bias because these creatures also do something good,” he says.

He cites the house geckos, which have been found to eat rats. Crocodiles, on the other hand, apart from being harvested for their skin, are also proving to be a delicacy in many parts of the Philippines, he says.

In 1974, Alcala founded Silliman University Marine Laboratory and began studies on the productivity of marine sanctuaries out of a grant from the National Research Council of the Philippines.

His team’s experiments with American scientist Alan White over 10 years on Sumilon Island, off the southern tip of Cebu province, showed that marine-protected areas do work.

The paper, which was published in a journal, moved Australian scientist Gary Russ to come over and conduct further collaborative research work.

Alcala’s work with underwater environments also led him to do pioneering studies on giant clams and poisonous crabs in southern Negros Island. Scientists even named one such crab—Demania alcalai—in his honor.

From 1989 to 1991, Alcala served as deputy executive director of the Philippine Council for Aquatic and Marine Research and Development, an agency under the Department of Science and Technology.

Silliman University invited Alcala to be its ninth president in 1991 but his term was short-lived. He was appointed environment secretary by then President Fidel Ramos in 1992 and later, chair of the Commission on Higher Education.

“Government work was demanding,” Alcala says, “because the DENR (Department of Environment and Natural Resources) had 20,000 people and I had to see if they were all doing the right thing.”

“But we confiscated a lot of logs. There was a cry for a total log ban at that time but I refused to declare it because there were good people who were doing their jobs in the forest industry. We had to run after the scoundrels who were just cutting trees without replanting,” he says.

President Ramos, he says, stood by his decision.

After his stint with the government, Alcala founded Silliman University Angelo King Center for Research and Environmental Management, which keeps him busy well into his octogenarian years. “I must think of retiring soon,” he says with a chuckle.

Looking back at his achievements in his long scientific career—which won him some 30 awards and distinctions, and which produced at least 200 scientific papers—Alcala says all these awards came as surprises.

“I never worked for any reward or recognition. I only want to do something for my community and my country,” he says.