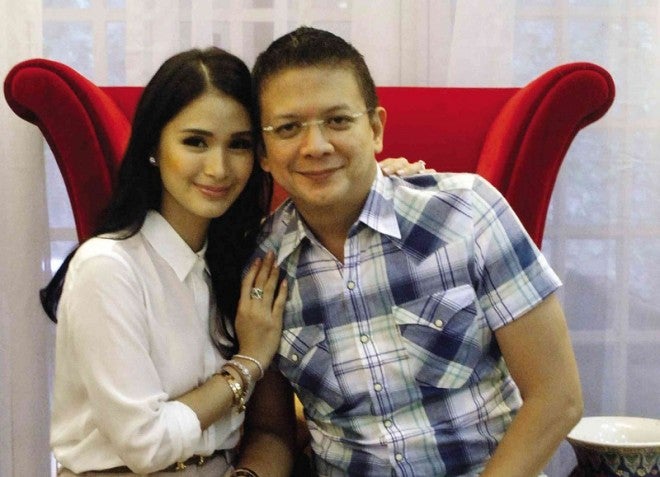 ENGAGED “Our getting married has nothing to do with my running or not running [for an elective post],” said Sen. Francis “Chiz” Escudero, here with fiancée Heart Evangelista. Escudero says you don’t have to be married to win. “Look at President Aquino.” ARNOLD ALMACEN

“The President has agreed to be best man at my wedding, not a [principal] sponsor,” Escudero said in an interview at the actress’ house in a Quezon City subdivision.

“Ayaw na magninong sa kasal, kasi may pamahiin na hindi makakasal kapag nagninong ang binata (he does not like to be a principal sponsor because of the superstition that a bachelor who stands as principal sponsor will never marry),” Escudero added in jest.

The senator said that he asked Mr. Aquino to be his best man at least two months ago, even before he proposed marriage to Evangelista last weekend.

Escudero, 44, proposed to Evangelista, 29, last Saturday at a family dinner at the Escuderos’ hometown of Buhatan, Sorsogon province.

Escudero described the President, who is also godfather to his two children from a previous marriage, as the “most honest President the country has ever had.”

“President Aquino perhaps is the most honest President we ever had, more than anyone else, maybe even more than his mother simply because of the availability of the technology. P-Noy has stood up to the scrutiny in modern times where technology has been available and everyone has a camera in hand,” he said.

Asked why he chose Mr. Aquino for his best man, rather than a relative or another friend, the senator said the President was “one of my closest friends for over 15 years.”

He also wanted a new start with his marriage to Evangelista.

“I wanted to change everything I did from my previous wedding, that’s why I am not getting anyone from my wedding sponsors in my first marriage,” he said.

Escudero, who was granted a church annulment only last July, denied that his engagement to Evangelista was a signal that he was running for president.

The proposal came after two years of dating and “going steady.”

Although they had been talking about marriage, Evangelista said she was still taken by surprise by the proposal.

“I still cried when he asked me and put on my finger the ring from his mother, the family heirloom,” she said.

According to Escudero, Senators Miriam Defensor-Santiago and Grace Poe may be part of the entourage of the wedding, whose venue has yet to be decided by Evangelista.

Santiago, who introduced the couple, is “close” to Evangelista, while Poe and Escudero have been “close” since the latter acted as the spokesperson of the late Fernando Poe Jr., Poe’s father, when he ran for president in 2004.

Escudero admitted to sometimes talking with Poe about the surveys touting them as a possible team-up in the 2016 presidential election.

He explained that as of now, running for higher office, for himself and Poe, would have basic problems.

“We don’t have the funds and so many things have to fall into place. Others have moved heaven and earth, others may have already moved the earth, I’m not sure about the heaven part, but for me and Grace Poe we do not still have heaven and earth,” he said.

“If running is an option in 2016 at all, we do not have any party or money [but] we will cross the bridge when we get there,” Escudero said.

According to Evangelista, her fiancé’s running for president in 2016 does not figure prominently in their conversations.

“We don’t talk about these things, and I don’t want to talk about it because it would sound mayabang (boastful), and besides we work in different worlds,” she said.

She also revealed that before she exclusively dated Escudero, Santiago had encouraged her to meet other men outside of show business, including the senator.

“She set me up with other men to see the world and widen my horizons and was also surprised that I ended up with Chiz,” Evangelista said.