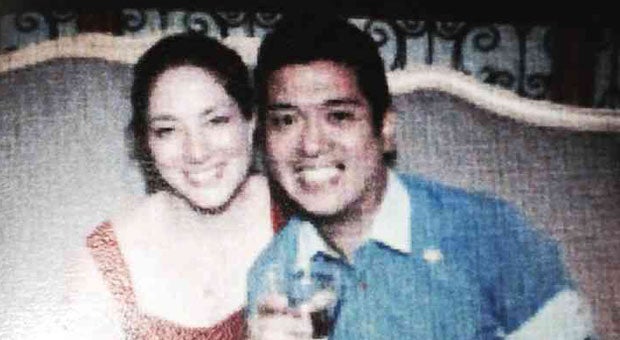 A year before he was killed, international car racer Ferdinand “Enzo” Pastor exchanged blows with the businessman who would later be revealed as his wife’s lover and tagged as the brains behind his murder.

The fistfight erupted at the Hyve bar in Bonifacio Global City because Enzo “knew about the affair” between his 28-year-old wife Dahlia and Domingo “Sandy” de Guzman, according to an Inquirer source.

The illicit relationship started in 2012, the source added.

Following De Guzman’s arrest on Tuesday, the police have maintained that this love triangle led to the attack on the 32-year-old Pastor, who was shot dead by a motorcycle-riding gunman while driving in Quezon City on the night of June 12.

The alleged hired killer, a Pasay city policeman who was arrested on Aug. 23 for drug peddling but later admitted his role in Pastor’s killing, executed an affidavit saying he earlier met with De Guzman and Dahlia at the Manila port area. In that meeting, he said, the businessman asked for “help” because Dahlia had been suffering beatings from her husband.

These details emerged Thursday as the Philippine National Police filed murder complaints in the Department of Justice (DOJ) against De Guzman, Dahlia, and the confessed gunman, P02 Edgar Angel.

The businessman was also charged with illegal possession of firearms because of the two pistols seized from him when he was arrested at his car shop in Muntinlupa City. Dahlia, who remained at large, was also sued for parricide.

De Guzman and Angel were brought to the DOJ for inquest proceedings Thursday morning, wearing caps and covering their faces with towels.

Speaking to reporters at the DOJ, Salvador Panelo, counsel for Pastor’s parents Thomas and Remy, said his clients were “still in a state of shock” over Dahlia’s alleged involvement.  “They wished it wasn’t true for the sake of their children.”

Ed Villena, another lawyer for the Pastors, said in a radio interview that he and the victim’s parents had spoken with Angel to personally assess his credibility. “I told him that what he did was serious and punishable by reclusion perpetua (up to 40 years behind bars). His extrajudicial confession would not reduce the penalty.”

Quoting Angel, Villena said De Guzman approached him to have Pastor killed because Dahlia supposedly wanted to end her marriage.

“Based on his confession, he met De Guzman and Dahlia at the pier. De Guzman asked for Angel’s help because Dahlia was being beaten up [by her husband] and he (De Guzman) even showed him pictures of a bruised Dahlia. Angel said he was desperate for money and was convinced by the two, so he accepted,” Villena said.

Villena added that Pastor and Dahlia’s housemaid had also spoken to the police about the illicit affair.

Also on Thursday, the PNP said another suspected contract killer currently under its custody claimed that he was also contacted by De Guzman to have Pastor killed.

In a press conference at Camp Crame, Criminal Investigation and Detection Group (CIDG) chief Director Benjamin Magalong said Alvin Nidua, who was arrested Aug. 13, admitted being approached by the businessman but that he turned him down.

Nidua was arrested by the CIDG’s Task Force Pivot after a shootout in Taguig City. He is being linked to several murder cases, the CIDG chief said.

The Bureau of Immigration said its records showed that Dahlia Guerrero-Pastor had not left the country and that the agency was treating her as a “person of interest” who at this point could not be prevented from going abroad in the absence of a court order. With a reports from Tina Santos, Julie Aurelio and Jaymee Gamil