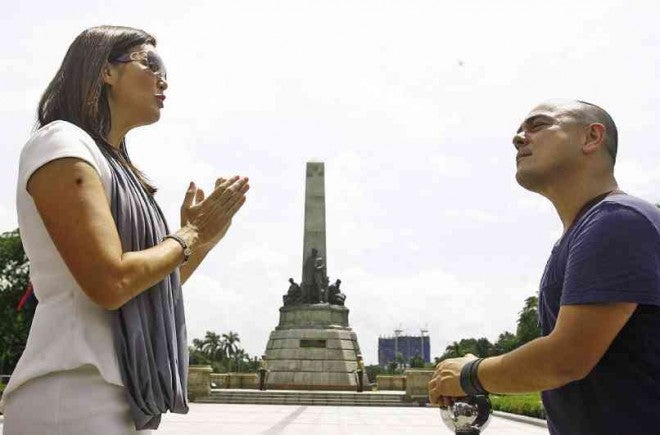 Sen. Pia Cayetano on Wednesday admonished the developer of a 49-story condominium in Manila which critics said would mar the sight line of the Rizal Monument after a hearing showed that the project exceeded the limits set by a local zoning ordinance.

A lawyer for DMCI Homes, Inc., however, justified the Torre de Manila condominium, saying the project was given the green light by the city’s building official who issued a permit for its construction in 2012.

During a Senate hearing, Cayetano pointed out that Manila’s Zoning Ordinance had set a floor to area ratio (FAR) of four on the property where the condominium was being built. The city council had found out that Torre de Manila’s FAR was 7.79. The building metric compares a structure’s total floor area to the size of the land on which it will be constructed.

“On the basis of the zoning permit, we checked it out and we exceeded the requirement,” lawyer Roel Pacio said. He added, however, that when they applied for a building permit in 2012, it was granted by the city building official who was not identified in yesterday’s hearing held at the headquarters of the National Historical Commission of the Philippines (NHCP) on TM Kalaw Avenue in Manila.

“It was our assumption that with the building permit, we can proceed with the construction of the project,” Pacio said.

Meanwhile, NHCP spokesperson Maria Serena Diokno was of the opinion that the project was not in violation of any national law.

In a letter sent to DMCI last year, Diokno was quoted as saying: “Your project site is outside the boundaries of Rizal Park and well to the rear of the national monument. Hence it can’t possibly obstruct the front view of the monument.”

She also noted in yesterday’s hearing that Torre de Manila was about 450 meters away from Rizal’s monument, well outside of Rizal Park and any buffer zone that might apply to it.

In an interview afterward, Cayetano raised the possibility of recommending charges against city government officers and DMCI should they be found to be negligent in their duties.

“In the Civil Code, we have provisions on good faith and bad faith builders. If it appears that the builder is not in good faith, then under our Civil Code, they would bear the burden of demolition or removal. And the court can order that. As to the national government on its own upholding the constitutional provisions on preserving our culture, it could do that if it has the political will,” Cayetano said.

For his part, a staunch opposer of the project, tour guide and cultural activist Carlos Celdran said he would leave it to the government and to courts to determine what action to take.

“They knew they were violating the ordinance so I’ll just let other people pursue the legal aspect. But I’m going to look toward the positive side. I’m glad Senator Cayetano listened to my suggestion to plant trees or find solutions to bring back attention and respect to Rizal,” he said.

In talks between the city government and DMCI officials in January, it was agreed that the firm would modify the design of the building’s facade to complement the park and take steps to reduce its impact on the monument.