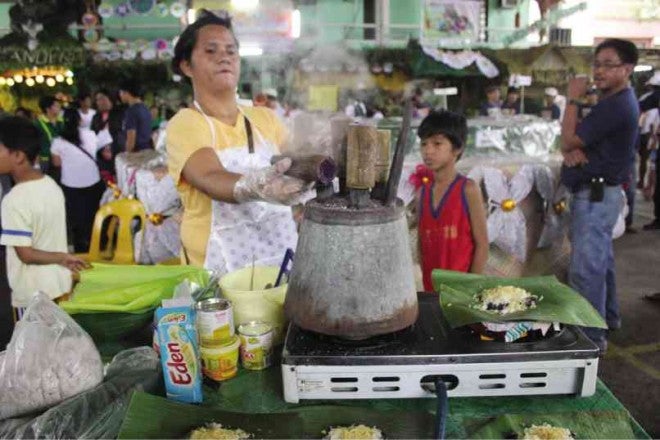 A giant “kalamay atin” stole the culinary stage during the 12th Guilingan Festival of Siniloan town.

Measuring 3.8 meters in diameter and more than an inch thick, the round, sticky ‘kakanin’ (delicacy) spread on banana leaves and covered on top with a clear plastic sheet was an inviting piece at the town’s plaza when the festival opened on Monday.

The festival host barked on the microphone to keep the children away from it after they were seen drooling over the “kalamay.” Instead, the host invited people to come back Aug. 28, the third day of the five-day festival, when the kalamay is sliced and shared by everyone.

“It was so far the biggest kalamay atin the town has ever made,” said Siniloan tourism officer Gregorio Saliba.

Asked why it is called such, he said, “because it’s neither yours nor theirs but ours to share.” “Atin” means ours.

The kalamay atin is a Filipino delicacy made from “galapong” (flour), thickened by “kakang gata” or the milk from the first squeeze of grated coconut, and sweetened by brown sugar. The ingredients are mixed and cooked rigorously for six long hours to ensure an even and fine texture.

For the festival, which coincided with the town’s 431st founding anniversary held every last week of August, Saliba said the municipal government spent P40,000 for the giant kalamay atin cooked by six local “maghahalo” (persons mixing the ingredients).

The kalamay atin is just one of about 30 varieties of Siniloan’s popular kakanin. Among the others are the “ube,” “pichi-pichi,” “palitaw,” “puto bumbong” and some odd-sounding ones like the “bagets,”  a mix of leche flan, ube, beans, and “macapuno,” and the “OA,” which is similar to “buchi” balls but covered with peanuts and without the mongo filling.

The bagets was named after the 1984 Filipino film of young actors sporting colorful clothes, while a story behind the OA, “is that people are ‘overacting’ after tasting it,” Saliba said.

“When we were young, people during Christmas would say ‘tuloy kalamay’ (come in for kalamay) and the children would be given kalamay instead of money,” Saliba recalled.

He said cooking ingredients back then were so cheap that everyone could afford giving kakanin away for free.

As a child, Saliba remembered he and his friends, “were so fed up (with kalamay), we’d just stick the kalamay atin under the tables and leave.”

“But now, you won’t dare say tuloy kalamay anymore unless you want a large crowd to come into your house,” he said.

A few old families of “magluluto” (kakanin cooks), specially in the villages of Burgos, Mendiola and General Luna, remain although they were not as many as before, observed Siniloan Mayor Eduardo Tibay.

He said the increasing price of ingredients and the packaging costs were factors in the dwindling number of local kakanin makers.

Siniloan, a second class municipality 84 kilometers south of Manila, has remained a sleepy, small town at the foot of the Sierra Mountain ranges.

Agriculture has always been its main source of livelihood.

“We want to reopen the minds of our constituents to the potentials of cooking kakanin,” said Tibay, who remembered growing up in a household cooking the kalamay atin.

He said making a giant kalamay atin, the first time the town did, was a reminder, specially to the younger generations, to preserve a cultural heritage they might just lose.

Read Next
Aquino says SC too meddlesome
EDITORS' PICK
Editorial: Unusual haste
New Year, New Rediscoveries
Driving can be even more rewarding this New Year — here’s why
Tracing app pesters MRT commuters
Experience clearer calls nationwide with Smart VoLTE
Senate probe foils vaccine overpricing
MOST READ
Duterte to firms: No franchise until you settle your accounts with gov’t
7 copassengers of UK variant patient can’t be traced
Norway advises caution in use of Pfizer vaccine for the most frail
#DefendUP trends after DND scraps agreement with UP
Don't miss out on the latest news and information.