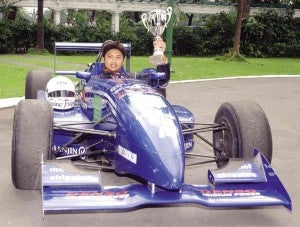 MANILA, Philippines — The mastermind and his hired gunman, allegedly a Pasay City policeman, behind the killing of racing champion Ferdinand “Enzo” Pastor have been arrested, police said.

Senior Inspector Maricar Taqueban, public information chief of the Quezon City Police District, confirmed the arrest of the suspects and said they would be presented to the media this Wednesday.

In a radio report, Police Officer 2 Edgar Angel admitted to the authorities that he was paid P100,000 to ambush Pastor.

The report, however, did not identify the arrested businessman who gave orders to Angel.

Radio reports also said the victim’s father Tom Pastor went to the Quezon City Police District (QCPD) to file cases against the businessman and the police.

In July, Davao City Mayor Rodrigo Duterte offered a P1-million bounty for the capture of the assailants.

Duterte claimed he was a friend of the slain racer’s father.

‎Pastor, who had just won a racing competition in Batangas, was shot “11 times” by a masked gunman on a motorcycle at a Quezon City intersection last June 12.

Days after his killing, the QCPD formed a seven-man investigating team to focus on the murder of Pastor.

Read Next
American woman is being held hostage in Syria
EDITORS' PICK
Acer starts the year off strong with the Aspire Vero National Geographic Edition
The best of bayside and city living at SMDC’s Sail Residences
EDITORIAL: Protecting the polls’ integrity
COVID-19 virus spread slowing down in Metro Manila, says OCTA Research
Over 3 Million worth of prizes to be won at Smart Padala’s SENDali Manalo Promo!
Comelec junks petition to scrap Bongbong Marcos COC
MOST READ
Drug lord Espinosa tried to escape through air vent at detention facility – NBI
In Batanes, octogenarian dies of COVID-19
When to get boosters after positive COVID test
Marcos Jr. visits Cebu, stands as ‘ninong’ to mayor’s son
Don't miss out on the latest news and information.