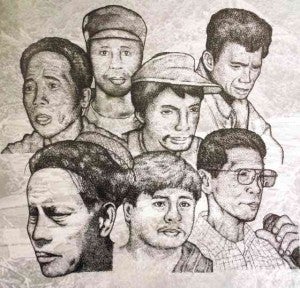 ILLUSTRATION BY DOROTHEA YSABEL MARANAN FROM THE BOOK “CORDILLERA HEROES”

Except in some forgotten government archives, people will never find Ama Lumbaya, Pascual Pocding or Daniel Ngayaan on a list of national heroes like Jose Rizal or modern heroes like the late Interior Secretary Jesse Robredo.

But they are patriots—at least to the people of the Cordillera.

Lumbaya, a communist rebel, was a “pangat” (peace pact holder) of the Butbut tribe in Kalinga province who campaigned against the government’s proposed Chico River Dam in the late 1970s when the project threatened to inundate indigenous Filipino communities. He died from an illness.

Pocding, a retired security guard of a local mining firm and a member of the 11th Infantry Guerrillas during World War II, led his village in Itogon town, Benguet province, against the construction of San Roque Multipurpose Dam. He also succumbed to an ailment.

Ngayaan, like Lumbaya, was a champion of the Chico River communities that fought the martial law dam project. He was abducted allegedly by former rebels who splintered to form slain rebel priest Conrado Balweg’s militia. He was reportedly killed by Balweg’s group, who later forged peace with the late former President Corazon Aquino. His remains were never recovered.

Their stories follow a common thread: They defended indigenous peoples’ (IP) rights in the Cordillera.

Their respective crusades were chronicled in the book, “Cordillera Heroes,” that was launched at the University of the Philippines Baguio on Aug. 18.

Published by the Asia Indigenous People’s Pact, the book narrates the lives of 23 men and women “who dedicated their lives to the struggle and who died serving the Cordillera people,” some violently, according to the book’s introduction written by editors Jill Cariño and Luchie Maranan.

The region is dominated by the Igorot, they stress, but the Cordillera’s natural wealth and ancestral lands have been “sources of conflict between its inhabitants and the State.”

“The people’s struggle was [ignited] during the early 1970s when the Marcos dictatorship tried to build four mega dams that would submerge several indigenous communities along the Chico River,” Cariño and Maranan say.

Although the protests eventually compelled the government to drop the Chico River Dam project, the struggle for indigenous peoples’ rights has not stopped as various interests continue to exploit the region’s “rich mineral deposits and energy resources,” they say.

People have died in this struggle. “Nobody wants to lose even the one life of a friend, a relative or a colleague,” they say, “but if not for their deaths, the consciousness and commitment to [proceed with the] struggle would not have been stirred nor strengthened.”

Cariño and Maranan say the 23 stories they compiled are of ordinary people who lived extraordinary lives.

Sixto Tangid was a “mombaki” (also spelled “mumbaki,” a native priest), who did not abandon his obligations as community ritual elder in upland communities even after he joined the New People’s Army in 1980. He died from a leg wound at the age of 60.

Macliing Dulag, the acknowledged leader of the Chico Dam protests and a constant reference as the icon of Cordillera activism, once refused a bribe by exclaiming: “This envelope [offered allegedly by a Marcos crony] can contain either a letter or money. If that is a letter, I do not know how to read it. And if it is money, I don’t have anything to sell, so take your envelope and go!”

There are many more heroes, some unheralded, who are “portraits of Filipino people who refuse to be cowed by repression,” the editors say.