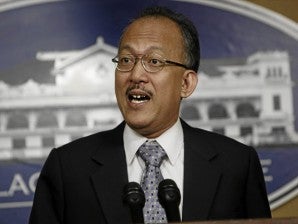 MANILA, Philippines – One of its representatives may be calling for the head of two Cabinet members but that doesn’t mean that Akbayan has turned against President Benigno Aquino III.

Communications Secretary Herminio Coloma Jr. said he was able to speak with Presidential political adviser Ronald Llamas, one of the leaders of Akbayan, on Tuesday.

(He clarified that Akbayan Partylist continues to support President Aquino and the reform program of his administration.

However, Coloma admitted that they were not able to discuss Akbayan Representative Walden Bello’s letter to Aquino, calling for the sacking of Budget Secretary Florencio “Butch” Abad and Agrarian Reform Secretary Virgilio de los Reyes.

He said media should ask Bello instead to clarify the contents of his letter.

Nevertheless, Coloma said the President did not prohibit opposing opinions among his allies.

He added that Aquino stated that he did not want Abad to resign amid the issue of the Disbursement Acceleration Program.