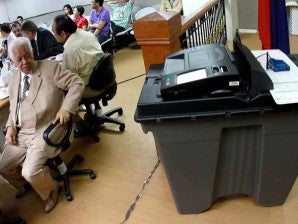 MANILA, Philippines – “No way” to no elections in 2016. That was Commission on Elections (Comelec) Chairman Sixto Brillantes Jr.’s assurance amid the issue being floated around so President Benigno Aquino III can keep his post.

“No way that there can be no elections in 2016. Whatever happens, there will be elections. With our P16.9-billion budget there will be,” Brillantes said on Tuesday during the Senate finance committee’s hearing on the Comelec’s proposed 2015 budget.

Senator Nancy Binay during the hearing asked Brillantes whether a no-election scenario was possible in 2016 after presidential spokesman Edwin Lacierda reportedly hinted that the 2016 elections might not push through.

“Let’s wait for the endorsement of the President kung sino ang kanyang kandidato sa 2016 kung sakaling itutuloy ang 2016 elections [on who his candidate will be in the 2016 elections if ever it does push through]” Lacierda said in a televised interview on Aug. 23.

Brillantes, however, said that no elections or even term extension for the president in 2016 would not be possible without amending the constitution.

“There cannot be any term extension until the constitution is amended,” Brillantes said.

Brillantes said that they are looking at the possibility of using a mix of the old Precinct Count Optical Scan (PCOS) machines which were used in the 2013 elections and brand new machines.

“We are not yet sure if we can effectively go with all brand new machines because it will cost P18 billion,” he said.

He said they are looking at the possibility of selling the old PCOS machines so they will have enough funds for the purchase of the new ones.

“Even if we want all new we do not have the funds. Most likely we will have to use a mix of both old and new machines,” Brillantes said.

Comelec asks Congress for budget to replace all PCOS machines