KUALA LUMPUR – Malaysian opposition leader Anwar Ibrahim has rejected offers of asylum abroad ahead of a final appeal in October on a sodomy conviction that could see him jailed, a political aide said Monday. 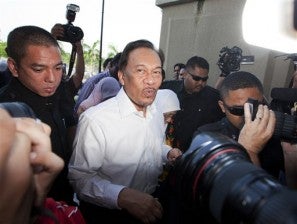 Anwar was convicted and sentenced to five years in prison in March on charges he sodomized a young former male aide, but is free pending a final appeal set for October 28-29.

Anwar, 67, has dismissed the case as fabricated by the government to ruin his political career.

The political aide, who asked not to be named, declined further comment but said that a media report Monday on the asylum offers was correct.

The Star newspaper quoted Anwar saying he had received several offers by “foreign leaders” to go overseas but would not accept them.

“I met up with a few foreign leaders who advised me to go overseas to escape a possible prison sentence. At my age, they say they cannot imagine seeing me behind bars,” Anwar was quoted as saying.

The story did not specify which countries Anwar was speaking of.

Sodomy is punishable by up to 20 years’ jail in the Muslim-majority nation.

The accusation surfaced shortly after Anwar led a three-party alliance to unprecedented electoral gains in 2008.

A lower court acquitted Anwar in 2012, but an appeals court controversially overturned that verdict in March.

Anwar, a former top leader in Malaysia’s ruling United Malays National Organization (UMNO), had earlier spent six years in jail on separate sodomy and corruption charges after a power struggle in the late 1990s that saw him expelled from the party.

The charges triggered massive protests against the UMNO-led regime.

UMNO has governed since independence in 1957, but has seen its support slump over corruption, authoritarian rule and divisive racial policies.

After his release, Anwar joined the fractious opposition, leading it to unprecedented electoral gains.