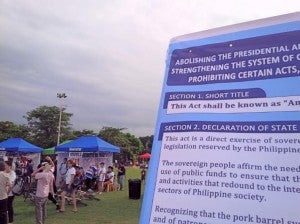 Bayan Muna Representative Neri Colmenares said the president enjoys the fattest pork in the budget in the forms of the Malampaya fund, the President’s Social Fund, and the Special Purpose Funds.

“The president and his allies keep saying that there are no more pork barrel funds in the 2015 budget but we know otherwise because there are huge lump sums in the budget that can be nothing else but pork,” Colmenares said in a statement on the day of the anti-pork barrel rally held in Luneta on Monday, National Heroes Day.

Colmenares also said Congress practices a new mechanism of asking for pork, even after the Supreme Court junked as unconstitutional the Priority Development Assistance Funds (PDAF) at the height of the pork barrel scam.
The scandal resulted in the detention of three senators, their aides, and alleged mastermind, Janet Lim-Napoles.

“Congress has created a new mechanism for handing out pork to its members through a discreet referral and recommendation system even as it has kept intact the President’s gargantuan discretionary funds, including the P132-billion Malampaya fund, the President’s Social Fund and the P449-billion
Special Purpose Fund” Colmenares said.

Colmenares said the people’s initiative against pork barrel is meant to criminalize the use of pork barrel funds including the president’s capacity to “impound the funds or realign them after Congress already passed the General Appropriations Act.”

The militant solon was referring to Aquino’s outlawed Disbursement Acceleration Program, a savings-impounding mechanism meant to pump-prime the economy.

“If Pres. Aquino and his allies and supporters do not sign the people’s initiative then he would truly be exposed as the primary defender of the pork barrel system. They can be considered as addicted to pork…” Zarate said in the same statement.

Anti-pork barrel groups led by the Abolish Pork Movement are holding a campaign to gather six million signatures to pass a law that would ultimately scrap the pork barrel system.