US says American held in Syria has been freed 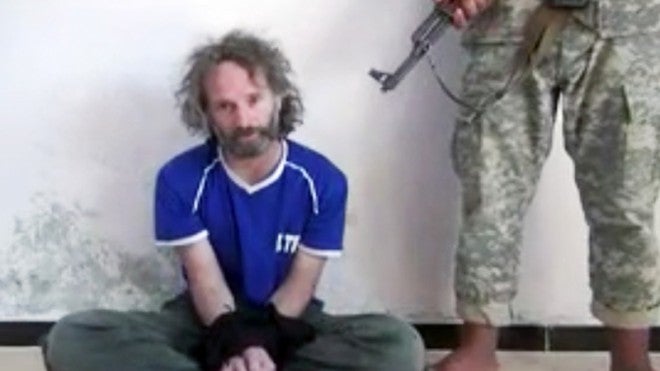 In this image made from undated video obtained by The Associated Press, which has been authenticated based on its contents and other AP reporting, a man believed to be Peter Theo Curtis, a U.S. citizen held hostage by an al-Qaida linked group in Syria, delivers a statement. The U.S. government said on Sunday, Aug. 24, 2014 that Curtis, who had been held hostage for about two years, had been released. (AP Photo)

The freed American is Peter Theo Curtis of Massachusetts. He wrote under the byline Theo Padnos, officials and family members said.

A senior administration official said Curtis was released in the Golan Heights, where he was met by U.S. government personnel who were transporting him to Tel Aviv. The official was not authorized to speak by name and discussed the release on the condition of anonymity.

“My heart is full at the extraordinary, dedicated, incredible people, too many to name individually, who have become my friends and have tirelessly helped us over these many months,” Curtis’ mother, Nancy Curtis, said in a statement from the family. “Please know that we will be eternally grateful.”

“He seems to be in good health,” Curtis’ cousin Viva Hardigg said in an interview. “We are deeply relieved and grateful for his return and the many people who have helped up secure his freedom. At the same time, we are thinking constantly of the other hostages who are still held and those working to help them be freed. We want to do everything we can to support their efforts.”

Kerry, a former senator from Massachusetts, voiced relief and gratitude for Curtis’ release, “particularly after a week marked by unspeakable tragedy.”

“Theo’s mother, whom we’ve known from Massachusetts and with whom we’ve worked during this horrific period, simply refused to give up and has worked indefatigably to keep hope alive that this day could be a reality,” Kerry said.

The news comes days after the Islamic State group posted a web video showing the murder of James Foley, an American journalist who was kidnapped in 2012 while covering the Syrian uprising. The group said the killing was in retaliation for U.S. airstrikes in northern Iraq.

The Islamic State and the al-Qaida linked group that had held Curtis have split and parted ways. U.S. officials say the Islamic State is the far more ruthless organization.