Each of us can become heroes, say PDI readers 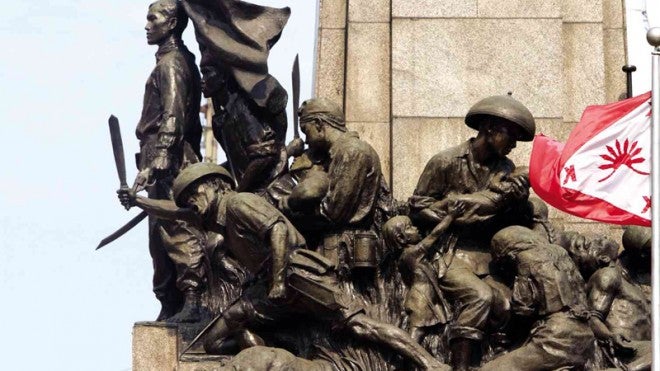 DAY FOR HEROES Monday has been declared a national holiday to honor Philippine heroes. For many, their everyday heroes are right inside their homes. About a fourth of 304 respondents, who sent in their responses via e-mail, fax, mobile and Inquirer.net, said their heroes were family members—their moms, dads, sisters, brothers, aunts and grandmothers. EDWIN BACASMAS

MANILA, Philippines–To the Philippine Daily Inquirer (PDI), heroism is not just in textbooks and on concrete monuments. There are everyday heroes around us. We asked our readers about their everyday heroes and what they are made of, and these are their answers.

For many, their everyday heroes are right inside their homes. About a fourth of 304 respondents, who sent in their responses via e-mail, fax, mobile and Inquirer.net, said their heroes were family members—their moms, dads, sisters, brothers, aunts and grandmothers.

Of those who said their heroes were family members, close to half (46 percent) mentioned mothers as their everyday heroes.

Others said their everyday heroes were volunteers, nongovernment organization (NGO) workers, teachers, security guards, doctors, environmentalists, politicians, public servants and even their house help—proving that heroism came in all forms and kinds.

Some named Filipino heroes like Jose Rizal and Andres Bonifacio, while others mentioned international icons, such as Mahatma Gandhi, Mother Teresa, Nelson Mandela and Pope Francis. Some said God was their everyday hero. A few also nominated themselves.

Still, for others, anybody and everybody can be a hero—from street vendors and garbage collectors, to Metropolitan Manila Development Authority (MMDA) enforcers and public utility vehicle drivers, to hardworking Filipino workers.

Love, helpfulness, sacrifice, selflessness and courage were the most common words associated with everyday heroism.

Those who filled out the “Heroes ’R Us” nomination form that was printed in the Inquirer from Aug. 15 to Aug. 21 said they admired their everyday heroes for their selflessness, dependability and willingness to sacrifice and put the needs of other people ahead of their own.

They were admired for their dedication, commitment, helpfulness and courage—just a few of the many traits mentioned in the responses.

“They put our needs first before theirs like normal heroes do. [Our mom] sacrifices a lot for our sake and that’s what makes her my hero,” said 18-year-old Ricaella Angela Villarama. She was referring to her mother, Jacqueline.

“Heroes are really about doing good deeds and helping others without asking for anything in return. They are ready to make sacrifices,” said Nadine Bernate. For Bernate, her aunt Alena D. Alcantara is her hero.

Alyanna Marie Manzano said her father, Joel, was better than the more popular superheroes. “He is my hero because he is brave, strong, caring and he loves me more than his life. I don’t idolize Superman, Spider-Man or Batman because I know someone who is more amazing than them. I call him Papa.”

“He is my knight in shining armor, my protector and my savior. He is none other than my brother. He has always been there to save me,” Francesca Pauline Ora’a said.

For Trevor Maverick Kua, 19, his sibling Tracy is his hero. “My sister has always been there to back me up. One time in our toilet we saw a spider—not just an ordinary spider, but a big one—and we were really scared, but she stayed strong for both of us,” he said.

“I asked my sister why she did that. She answered, ‘Because I know you’re afraid and I can’t let you know that I am, too, because that will just scare you more.’ That made me smile. I was only 5 at that time but I still remember it after 14 years,” he said.

Michael Martinez’s hero is his mother. “Although I am a bad child she still loves me unconditionally,” he said. “She didn’t give up on me when I was at my worst. Instead, she helped me find out what I really wanted.”

Estaniel Yap said his grandmother was his hero. “She never fails to wake up in the morning to cook good food for me. She’s like my alarm clock—she always wakes me up in the morning. Without her, I can’t study.”

Kevin Jacinto nominated kasambahay Mary as his hero. “Though she would be far away from her two daughters, she still chose to work here in Manila just to provide money for her loved ones. I chose her because she is a hardworking person. She is religious and kind.”

Others point to mothers as heroes, even if they are not their own mothers. “Heroes are really about selfless and unconditional love,” said Rosalynn Papa, a doctor who nominated a mother of one of her patients, Jean de la Cruz of Cabanatuan City, as her everyday hero.

An everyday hero is just like Vanny, a Yakult vendor, according to Maria Erika Bagacina. “Vanny is a very inspiring person because she works hard for her children,” she said.

“[They are] two amazing and passionate women who dedicate their lives in caring for neglected and abandoned children,” Garay said.

Marivic Faicol turned the spotlight on her fellow teacher, Abraham de Castro, vice principal of Middle Grade School at San Beda Alabang, because of his “exceptional work ethic, love and dedication for his craft.”

Sergio Abcede praised “public school teachers in barrios” for their sacrifice in enduring low salaries despite the long work hours.

Gaea Katreena Cabico, 16, sees an everyday hero in Tresalin Cabico, an open high school program coordinator. “She devotes her time to reaching the unschooled,” Gaea Cabico said. “She believes that education can change the world.”

Exceptional students were also hailed as heroes—like Jann Angelo Pagharion, who comes to school early to help lay out tables and chairs at the school quadrangle in preparation for their school’s “bridging” program, which helps students who need to catch up on lessons.

“He’s the first to help carry the heavy bags of third- and fourth-graders to the second floor,” said Lily Rodrigo-Canlas. “When asked by his teachers why he does these acts of helpfulness, he says it’s his way of easing the pain of having lost his mother recently to cancer.”

Canlas also considered another student, Cyrus Alvaran, a hero. “He may not be the brightest in his senior class, but he stands out because of his spirit of volunteerism,” Canlas said, adding that he also helps carry bags of third- and fourth graders from the quadrangle to the second floor.

“It is worth mentioning that he used to be on the special education (SPED) program, but he has been ‘main-streamed’—meaning, he has joined his regular classmates—due to his perseverance. In fact, he now helps his younger sibling, who is currently under the SPED program as he used to.”

“Heroes are really people whose lives are enriched by service to others—like Presing Capistrano, who helps poor, elderly people become a community for each other,” Edward Gerlock said.

Retired Col. Joseph Asanza and his wife, Boots, were also cited as heroes. “They have established and are running an alternative school without walls for the indigenous people in the Sierra Madre mountains. They are so humble about their work that not many people know about it,” said retired Lt. Gen. Loven Abadia.

Enrique Alota, an author who wrote livelihood handbooks, is another hero. Since 2010, he sent copies of his handbook free of charge as birthday gifts to farmers in his hometown Bantayan and in Tacloban City, where he now lives.

“Heroes are really about practicing what they preach. He really loves nature and animals. He protects them,” Carlos Tangco added.

Tito Lorete Alcala was praised for his compassion for the elderly. Through Silya, which stands for Sa Iyo Lolo at Lola, Yantok aming Alay, Alcala donates rocking chairs to public spaces frequented by the elderly.

AID Foundation was commended for supplying water to upland communities through a hydraulic ram pump.

Raymundo Rodriguez, 64, paid tribute to Lupon, a group that seeks to resolve conflicts at the barangay level.

“Heroes are people who work unnoticed, those who dedicate themselves to serving their community voluntarily and selflessly,” Rodriguez said. He noted that Lupon had contributed to the reduction in the volume of cases filed in court.

Every Pinoy, a hero

Alvin Anthony Amora cited the Filipino workers. “Heroes are made of these: They are really about doing things with integrity, honesty and accountability. If you exemplify these in your day-to-day activities, the world will be a better place to live in. A community of service, a community of heroes,” he said.

For respondent Dennis, Filipino workers earning their keep through “rightful and clean ways”—whether they are small vendors, garbage collectors or self-employed—are heroes.

Liezl Zaragoza said there was a potential hero in every random stranger she met every day. “Heroes are people who dedicate their time and effort to help someone, even if they don’t know the person they are helping,” she said.

“Every one of us is a hero. Traffic enforcers, security guards, public utility drivers, dads, moms, head of the family. We are our own heroes because we all have someone to offer our lives just to see them happy,” said Christine Erika Inocencio. “The selfless acts they do each and every day make other people happy, safe, well-provided for, inspired.”

Starting Aug. 31, the Inquirer will publish the three most inspiring stories of personal heroes.