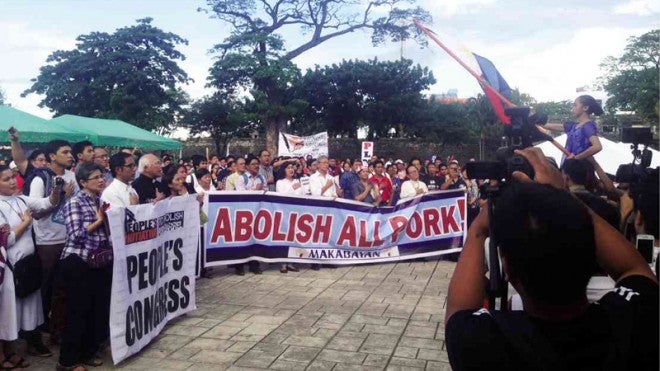 PROGRESSIVE, religious and youth groups gather at Plaza Independencia in Cebu City on Saturday afternoon as part of the launching of the People’s Initiative against the pork barrel system. Carmel Matus/INQUIRER VISAYAS

CEBU CITY—Walking for Bernard Villalon, 75, wasn’t as easy as two decades ago.

Accompanied by a friend, Villalon flew all the way from Marikina to Cebu City to take part in the sign-up drive for the People’s Initiative against the pork barrel system.

Villalon was among about 1,000 people who showed up at Mariner’s Court in Pier 1 here on Saturday morning to discuss the  proposed Pork Barrel Abolition Act.

About 4:30 p.m., he was at Plaza Independencia to join the launching of the signature drive to collect 5.4 million to start the people’s initiative.

Villalon said he decided to go because he didn’t want to let an opportunity to change the country slip away.

“In the years I have been in this world, the condition of the country has gone from worse to worst because of how the government is run. Our taxes have been milked by those used by those in power. We should change this kind of system,” said Villalon who directs stage plays for out-of-school youth.

No Cebuano legislator was seen during the daylong activity.

The congress participants also read the “Declaration of Unity of the People’s Congress” that called for the abolition of the pork barrel system, which remained intact in the national budget and entrenched in the political system.

“It is time for us, the people, to take matters into our hands and abolish the pork barrel system ourselves. We know we are up against entrenched and well-organized forces currently holding the reins of political power. We are also faced with lack of resources. But we will persevere and inevitably triumph against all adversity for we know this is the people’s fight,” it added.

Palma thanked the participants for taking part in the People’s Congress and join the sign-up drive to abolish the pork barrel system. “We started the ball rolling in Cebu. But I know there will be many more activities like this nationwide. We do all this for the love of our country. Let us put an end to that pork barrel system,” he added.

In his message of support read by Fr. Carmelo Diola, Manila Archbishop Luis Antonio Cardinal Tagle thanked the participants “for advancing decency in public life.” He said he was praying that the People’s Initiative would construct a culture of integrity and loving service to the Filipinos.

Cotabato Archbishop Orlando Quevedo encouraged all Filipinos to support the People’s Initiative by signing the petition. “The pork barrel system has been a bottomless pit of corruption, a terrible instrument of patronage politics, a war chest to perpetuate patronage politics,” he said.

Ustad Najeeb Razul of the Muslim Community in Central Visayas said: “Our campaign doesn’t end in this congress. There’s much work to be done. But we know that God will not change the condition of the people unless the people change themselves.”

In the afternoon, the antipork advocates went to Plaza Independencia where tents were put up where they could sign the petition for a people’s initiative to enact the proposed Pork Barrel Abolition Act.

Mark Canton of the Cebu Coalition Against the Pork Barrel System said they expected to gather at least 4,000 signatures during the launch. As of 5:20 p.m., about 640 people had signed.

The People’s Initiative aims to collect about 5.4 million up to six million signatures nationwide for people to pass or enact a law without going through Congress.

For the initiative to succeed, a petition must be signed by at least 10 percent of all registered voters in the country and at least three percent in each of the 234 legislative districts as mandated under Republic Act No. 6735 or the Initiative and Referendum Act of 1989.

Once the required number of signatures is gathered, the petition will be filed before the Commission on Elections which shall verify the signatures to determine whether or not to conduct a referendum within 45 to 90 days.

If the initiative gets the approval of the majority of voters, it will become a law.

Under the proposal, all proposed budgets submitted to any legislative body shall contain only itemized or line-item appropriations, except for the purpose of relief and rescue operations during calamities, and for the intelligence fund.

Releases from lump sum funds allowed under the act shall be supported with schedules indicating the specific government agency that received them and the specific purposes for the same.

The proposed legislation also calls for the abolition of the Presidential Social Fund. It would also penalize any public officer who authorizes spending public money not covered by or is in violation of any appropriation ordinance law.

Violators would face one to 10 years imprisonment and perpetual disqualification from public office. With a report from Carmel Loise Matus, Inquirer Visayas

Read Next
324 Albay villages still without electricity a month after ‘Glenda’
EDITORS' PICK
What to watch out for when selecting a video surveillance solution
PH importing sugar after all: Marcos okays 150,000 MT
Bakers’ turn: P4 hike on bread prices sought
Supply of white onions gone since July, growers say
vivo brings to the Philippines a powerful smartphone with a slimmer body, the vivo Y02s for only PHP 6,499
House energy committee chair Arroyo bats for cheap electricity
MOST READ
DepEd to give teachers P5K cash aid on 1st day of classes
LOOK: Miel Pangilinan dazzles in glittery pre-debut shoot
Suspect in rape-slay of teenaged biker arrested in Camarines Sur
DOJ indicts bank officer in $2.1 billion Wirecard fiasco
Don't miss out on the latest news and information.