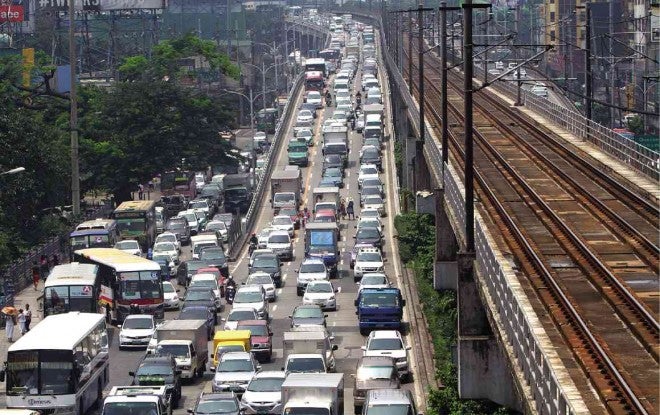 THE TRACKS on Edsa go silent for hours as another glitch idles the Metro Rail Transit on Saturday. EDWIN BACASMAS

Ten days after one of its trains got derailed due to a faulty link, the Metro Rail Transit (MRT) was forced to suspend operations at noon Saturday due to another kind of “disconnect.”

The 15-year-old elevated railway, due for expansion next year after being long-plagued by technical problems and overcrowding, remained idle at press time due to a communication system breakdown, officials said.

“Safety protocol requires that two-way constant communication is needed. Since we could not achieve this, we automatically had to suspend operations until it gets fixed,” according to MRT spokesperson Hernando Cabrera. “All these things are being done in the name of safety.”

In an interview Saturday afternoon, Cabrera said engineers on the site had yet to determine the reason for the systems-wide communications breakdown—a first on the MRT, as far as he could recall.

But he stressed that it was a “maintenance issue” traceable to the need for upgrades and rehabilitation work on the Edsa train line. MRT 3’s current maintenance service provider is Autre Porte Technique Global Inc., whose contract ends on Sept. 5.

Saturday’s disruption was just the latest in a series of glitches and accidents on the MRT, the worst being the Aug. 13 derailment of a southbound train that sent almost 40 people to the hospital for injuries.

A stalled but still loaded train was being pushed by another train to Taft Station in Pasay City when the coupler connecting the two broke, causing the first train to move without any control, smash through the station barrier and skid onto the open street.

An inquiry conducted by the Department of Transportation and Communications (DOTC) later pinned the blame on human error or the failure of the two train drivers and two control center employees to follow proper procedures.

As a result of the incident, the MRT decided to slow down train speeds from 60 kph to 40 kph for added safety, resulting in longer waiting time at the stations.

Cabrera on Saturday said the MRT management was moving to address the system’s problems but that the procurement process for the needed upgrade had been taking long. The MRT’s signaling system, for example, was supposed to have been replaced five years ago but the DOTC expects to have it replaced by the first quarter of 2015.

The signaling system is separate from the communications system, Cabrera said, but both platforms have to work hand in hand.

With the purchase of 48 new trains from China, the prototype expected to be delivered in August 2015, the DOTC said four-car trains would arrive at the stations every 2.5 minutes during peak hours, an improvement from the current system where three-car trains arrive at three-minute intervals.