MANILA, Philippines – Giving birth is regarded as one of the most wonderful experiences in life. However it is also a risky time for both the mother and baby because it puts both their lives on the line.

This is why maternal mortality and child mortality are included among the United Nations (UN) Millennium Development Goals (MDG), a set of targets in various basic services including health, poverty, and employment, that aim to improve the lives of people in a particular country.

Child mortality is the combination of three segments, under five-year-old deaths, infant deaths, and neonatal deaths or those that occur within the first 28 days after being born.

When the MDG targets were first proposed in 1990, the Philippines had an under-five mortality rate of 80 per 1,000 live births, 57 of which were infants.

“Reducing child deaths is one of the world’s top priorities as it is a basic human right of children to be born and to live decently,” Doctor Amado Parawan, Health and Nutrition Advisor of international nongovernment organization Save the Children, said in an email interview.

“At the household level, the death of a child can have huge effects on the psychosocial well-being of the parents, family members, and relatives,” he said. 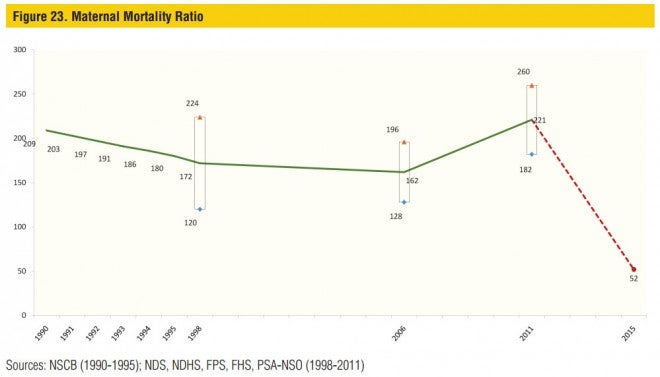 The number of mothers who die from childbirth have not decreased and instead increased to higher levels than when the MDGs started in 1990.

“While the difference between the 2006 and 2011 figures may not be statistically significant, the previous observation that the country is not on track in meeting MDG [on maternal mortality] still holds,” the Neda executive summary report stated.

The maternal mortality is among the MDGs that were given a “low probability” of being achieved which means less than 50 percent.

The World Health Organizations (WHO) states in a fact sheet published online in May 2014 that “maternal mortality is unacceptably high.”

“About 800 women die from pregnancy- or childbirth-related complications around the world every day,” it said.

“In 2013, 289,000 women died during and following pregnancy and childbirth. Almost all of these deaths occurred in low-resource settings, and most could have been prevented,” it added.

Half of child mortality rate 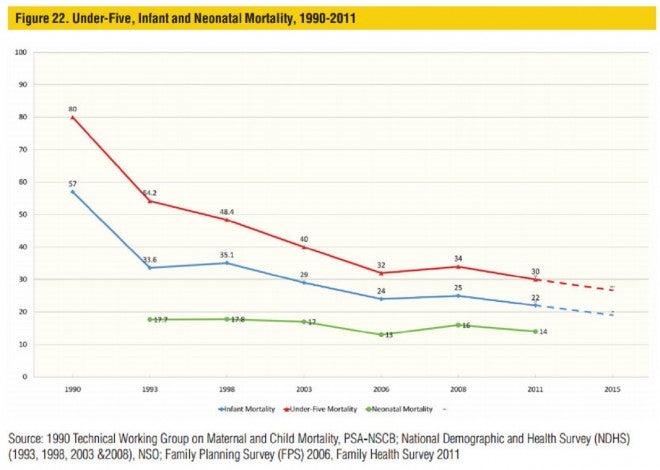 “There has been little progress in cutting down neonatal mortality which makes up almost half of all under-5 deaths. The 2015 target for under-five child mortality is 20 deaths per 1,000 live births while the rate in 2012 was 25,” Parawan said.

“Save the Children’s global study on newborn deaths released 2014 revealed that Philippines is one of the top 10 countries in the world with the greatest gap in equality for newborn deaths between poorest and wealthiest, and between rural and urban households. Babies born to the poorest and hardest to reach groups are most at risk of dying within few days after birth,” he said.

In order to reduce the child mortality rate of the Philippines, Save the Children urged the government to improve health care services and facilities to ensure safe delivery and care of newborns.

Save the Children cited WHO’s report on the top five causes of deaths in newborns which include prematurity or preterm deaths, complications during birth such as asphyxia and neonatal infections, pneumonia, sepsis or severe infections, and diarrhea.

“A child’s risk of dying is highest in the first 28 days of life. But many of these cases can be prevented using proven and cost-effective health care. One of them is the Kangaroo Mother Care, an effective intervention that allows skin-to-skin contact to maintain the normal body temperature of the baby, and initiation of breastfeeding immediately after birth,” Parawan said.

“Breastfeeding is the world’s most powerful defense when it comes to saving children’s lives. It actually builds children’s immune system that protects the body against illnesses, promotes mother-to-child bonding, and prevents malnutrition,” he said.

Parawan further highlighted the importance of having skilled medical attendants while the mother is giving birth to ensure the safety of mother and baby.

“Safe childbirth through a skilled birth attendant, ensuring delivery in quality health facilities, and easy access to referral systems are essential to lower overall child mortality. Many of these deaths annually in Philippines could be averted simply by having someone around who can make prompt decision and knows the importance of safe delivery to make sure the birth took place safely, and knowing what to do in an emergency,” he said.

Read Next
Roxas Boulevard to be closed Monday due to anti-pork protest
EDITORS' PICK
BIR audits tax compliance of Pharmally
Holidays made best with Acer’s ‘Holidays at Home’ raffle promo
Two more sites at Robinsons Malls for temporary offsite passport services
Smart offers wireless fiber-like speeds to Filipino homes with country’s first 5G Prepaid Home WiFi
Corruption in PH: Where presidential aspirants stand
Pharmally’s Twinkle Dargani in tears when asked about missing documents
MOST READ
Roque ‘hurt’ after presidential aspirant did not adopt him in Senate lineup
Pharmally’s Twinkle Dargani in tears when asked about missing documents
‘We’re not criminals:’ Jailed Pharmally exec asks Senate panel to just file cases
Gordon to Duterte: ‘How dare you ask for Filipinos’ vote when you failed them?’
Don't miss out on the latest news and information.