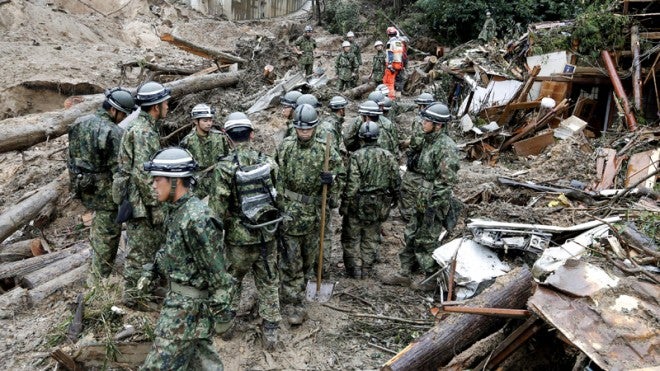 Japan’s Self-Defense Force members search for survivors in the rubble in a mud-ridden residential area following a massive landslide in Hiroshima, western Japan, Friday, Aug. 22, 2014. Hillsides caved in or were swept down into residential areas in at least five valleys in the suburbs of the western Japanese city on Wednesday, crushing dozens of houses after heavy rains.(AP Photo/Kyodo News)

The death toll from catastrophic landslides in western Japan could more than double, police said Friday, as the number of missing people rose to 52 in addition to the 39 confirmed dead.

Dozens of homes were destroyed when mountainsides collapsed on the outskirts of Hiroshima on Wednesday, sending tons of mud, rocks and debris crashing into suburban communities.

More than 4,000 people have now been ordered to evacuate their homes after forecasters warned more rain was on the way to already soaked hillsides, heaping misery on an area that has seen record downpours.

Firefighters, police and soldiers had to abandon search efforts overnight because of the risk of further landfalls, wary of the death of a colleague killed in a secondary mudslide on Wednesday along with a small boy he was trying to carry to safety.

The confirmed death toll remained unchanged Friday at 39, but the number of missing was raised to 52, having risen steadily over the last two days from initial single figures.

Officials said improved coordination between emergency services and local authorities meant they were now aware of more people who had not been heard of since the disaster.

“We initially counted only the people who were certain to be missing, such as those witnessed being carried away in gushing water,” said a spokesman at Hiroshima prefecture police.

“As we continued to investigate and assess the situation, the number rose,” he said.

Firefighters and soldiers were still keeping heavy machinery away from collapsed houses, preferring to remove debris by hand in the hope of finding survivors.

But falling rain was complicating their task in an area where the hillsides are made of decomposed granite — a coarse sand-like material that is used for driveways and paths, but which occurs naturally in this part of Japan.

Geologists say the rock is so weathered that it easily fractures into smaller chunks and becomes fragile when waterlogged.

Forecaster said heavy rain was expected in the afternoon, bringing with it the risk of further landslides.

Meteorologists said the downpour could continue until Saturday evening, with few breaks.

In Shime town in Fukuoka prefecture, a 21-year-old police officer was swept away in a flooded gutter in the early hours of Thursday while trying to assess road conditions.

His body was found about two hours later in a river, a Fukuoka police spokesman said.

Chikushino city also in Fukuoka issued an evacuation advisory to all its 102,000 residents