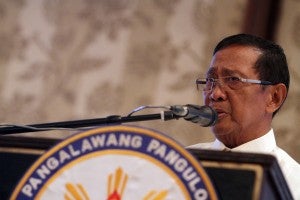 MANILA, Philippines—Vice President Jejomar Binay shrugged off statements made by Senate Majority Leader Alan Peter Cayetano that he was behind the graft and plunder complaints filed by a private lawyer Wednesday against the senator and his wife, Taguig City Mayor Lani Cayetano.

The complaints filed by lawyer Roderick Vera in the Office of the Ombudsman accused the Cayetanos of spending about P673 million from the senator’s pork barrel and the city government coffers on “ghost” employees and allegedly overpriced vehicles. Also named respondents were 16 other Taguig officials.

The Cayetano camp, through Councilor Darwin Icay, dismissed the allegations as fabrications meant to distract the public’s attention from the Senate inquiry into the allegedly overpriced government building projects in Makati City, where the Binays have been in power for the last 28 years. Cayetano grilled Binay’s son Jejomar Jr., the incumbent Makati mayor, in a Senate hearing on the day Vera filed his complaints.

Icay on Thursday continued to assail Vera’s complaints. On the issue of the ghost employees, he said, the December 2012 Commission on Audit (COA) report cited by Vera “never” said that the workers were nonexistent but had actually verified their assignments to various local government offices.

Their biometric and manually rendered attendance records were also verified by the COA, which also established that they were “flesh-and-blood persons rendering vital social services to the city’s constituents,” Icay said.

Both Cayetano and the elder Binay are known aspirants to the presidency in the 2016 elections.–Christine Avendaño and Kristine Felisse Mangunay