Aquino uncles back Binay run in 2016 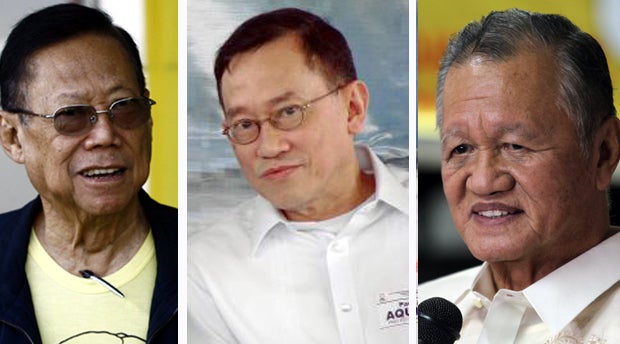 MANILA, Philippines—A political line was drawn on the tarmac during the commemoration of the 31st death anniversary of Sen. Benigno “Ninoy” Aquino Jr. on Thursday, with Vice President Jejomar Binay getting an open endorsement of his presidential plans from the elders of the Aquino clan.

“I heard the Aquino sisters are for you. I thought that’s right. Even the uncles, Uncle Peping and Uncle Paul,” Butz Aquino said in a speech that capped the wreath-laying ceremonies at the airport.

His declaration came nearly two weeks after the President’s youngest sister, actress and television host Kris Aquino, declared her and her sisters’ support for Binay’s plan to run for President in 2016.

“My sisters and I have been talking about it (the Liberal Party adopting Binay as presidential candidate), and we say that if this can bring about unity as … we’re not enemies … and if he continues what Noy has started, why not?” Kris Aquino said on her evening TV show.

She was commenting on Binay’s earlier statement that the ruling party could adopt him and field him as its presidential standard-bearer in the 2016 elections.

Maria Elena “Ballsy” Aquino-Cruz, the eldest of the Aquino children, said about Binay in a television interview: “If he wants to continue what Noy has started, [so much] the better.”

But in an interview on TV5 last week, President Aquino played down perceptions that his sisters endorsed Binay, who had long declared that he would run for Malacañang in 2016.

Aquino said he phoned Ballsy and Kris to ask about their statements and was told, “[The] media just forced us to say something.”

“The gist of what they said is, ‘If [Binay] would continue what our brother had started, thank you,’ or ‘it would be good,’ which is not the same as, ‘You should continue [what he had started],’” Aquino said.

In an interview with the Inquirer on Thursday, Butz Aquino clarified that his family’s support for Binay depended on who the Vice President’s opponent would be.

“If it’s Bongbong (Ferdinand Marcos Jr.), of course, I am for Jojo,” he said, using Binay’s nickname.

But it is too early to say who Binay’s rival for Malacañang will be, he said.

“There are still too many problems to deal with,” he added.

Butz, the 75-year-old younger brother of Ninoy, said the Aquino family still had to decide which presidential candidate to support in 2016.

“When the family meets, that will be discussed. Whoever the majority wants to support, everyone should support. Those opposed should just shut up,” he said.

Butz Aquino is a known longtime friend and ally of the Binays since “their marching days” when the August Twenty-One Movement (Atom) led the anti-Marcos demonstrations after Ninoy’s assassination.

The former senator, however, severed ties with Binay when he ran against the Vice President’s son Jejomar Erwin Binay Jr. for mayor of Makati City in 2010 but lost.

But he was all praise for the Vice President on Thursday.

“All of us are politicians. But only Jojo can go to 10 wakes in one night and still jog with his neighbors in the morning,” he said.

“His consultation with the people is unparalleled,” he added.

Binay was glad about the open endorsement by the President’s uncles.

When asked by reporters how important it was to his plans, he said he valued it because he and the Aquino family were friends.

“They are my friends, and we went through a lot together. This is a reiteration of our friendship,” Binay said.

Binay was among those who received the Medal of Valor during the ceremonies held on the airport tarmac, where Ninoy Aquino was shot dead upon his arrival from self-exile in the United States on Aug. 21, 1983.

Binay’s victory over Liberal Party vice presidential candidate Mar Roxas in 2010 came as a surprise, as he was the first local official to be catapulted to the second-highest office in the land.

His victory was partly attributed to the “Noy-Bi (Noynoy-Binay)” campaign aimed at making Aquino and Binay land the top two offices.

The campaign was reportedly orchestrated by the “Yellow Force,” led by Mikee Cojuangco-Jaworski, daughter of Peping Cojuangco.

Shortly after his victory in 2010, Binay announced his intention to run for President.

On Aquino’s declaration of his openness to the amendment of the Constitution to lift the presidential term limit, Butz Aquino said he doubted that President Aquino was serious.

But he added that if the President had decided to run for a second term, he and his family would support him.

“I think he is not serious. He just doesn’t want to be a lame duck. But if the family would decide in favor of that (second term), then let it be,” he said.

House Speaker Feliciano Belmonte Jr., the vice president of the Liberal Party, also believed the President was not intent on amending the Constitution.

“I have not heard him say, ‘Let’s do this.’ Even if (political amendment) is talked about, we just conclude that this is not yet clear,” Belmonte said in an interview after the ceremonies at the airport.

No to political revisions

Belmonte is pushing for the amendment of the economic provisions of the Constitution and he is opposed to political amendments, which he holds are “controversial” and a difficult battle to win.

“If that is the case, that has to be done through a (constitutional) convention. That’s difficult,” Belmonte said.

He explained that amending six economic provisions in the Constitution through legislation will take a long time.

“When you include the political provisions, we might not even finish it,” Belmonte said.

Belmonte is the author of a bill in the House that would amend the Constitution’s economic provisions to open to foreign investors land ownership in the Philippines, use of natural resources, public utilities, education, the media and advertising.

He should get married

Former Sen. Rene Saguisag who was also at the airport for the ceremonies, said he opposed a second term for President Aquino.

“I want him to rest in 2016. I want him to write a book and father a child. He should just get married,” Saguisag said.

President Aquino attended a separate Mass held at Manila Memorial Park in Parañaque City to mark the death anniversary of his father. With him were his four siblings, Roxas and other members of his Cabinet.—With reports from Christine O. Avendaño, PDI; Marc Jayson Cayabyab, INQUIRER.net; and Inquirer Research