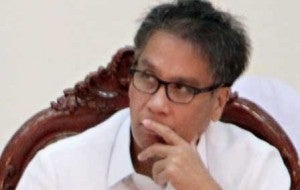 MANILA, Philippines – While two policemen were lauded by Interior Secretary Manuel Roxas II for their successful arrests, one station commander was under fire for failing to curb crime in his area and another was relieved for allegedly allowing his men to misreport crime statistics.

Roxas, in a statement on Thursday, said Francisco was sacked for failing to “reduce crime incidents in his area of responsibility.”

Tambaoan, meanwhile, was relieved “due to certain deficiencies in administrative performance.”

Earlier media reports said the erstwhile top police official of Caloocan was accused of allegedly allowing his personnel to falsify their area’s crime statistics in a bid to lower their crime rates.

“The leadership of NCRPO has sent a strong signal to all Chiefs of Police and Station Commanders in Metro Manila that they will be relieved from their posts if they cannot keep up with their performance to bring down crime incidents in their areas of responsibility,” Roxas said in a statement.

Though a Caloocan City policeman, Tolentino neutralized two armed men who robbed a gas station in Quezon City where he was filling up his motorcycle last August 17.

Tolentino, who arrested the robbers despite being off-duty, will be given a rank higher as his promotion.

Lacadin, Criminal Investigation and Detection Group (CIDG) deputy chief for operations, with his men, arrested the leader and two members of the notorious Alvin Nidua gun-for-hire group, who are considered high-value targets in Metro Manila.

Nidua has been tagged in the killing of several people in Metro Manila, Laguna, Antipolo, Pampanga, Tarlac, Camarines Sur and in Daraga, Albay.

His victims included SPO4 Rogelio Salver, who was killed in Purok 5, Lower Bicutan in October 2010.