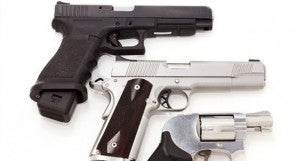 MANILA, Philippines – Following the announcement of the Philippine National Police (PNP) on its extension on the validity of gun licenses, a gun owners’ group questioned a portion of the newly enacted Republic Act 10591 or the Comprehensive Law on Firearms and Ammunitions.

Peaceful Responsible Owners of Guns (Pro-gun) criticized the retroactive implementation of the license to own and possess firearms (LTOPF) for gun owners, saying it was unconstitutional.

“Under this new system all existing licensed firearms owners who were previously approved are once again required to re-qualify and submit all over again all new requirements for ‘license to own and possess’ a firearm (LTOP),” the group said in a statement posted on its website.

Pro-gun was also the same group that filed a petition before the high tribunal questioning the gun law’s provision allowing the PNP to use courier service for deliveries of approved firearms licenses and applications.

On Wednesday, Chief Superintendent Virgilio Lazo, PNP Firearms and Explosives Office (PNP FEO) chief, announced the extension of validity of licenses about to expire in December until 2015 of the same month.

Lazo said the one-year reprieve was due to the enhancements to be made on the registration system of firearms.

Under the new gun law, gun holders are all required to secure an LTOPF before they can own firearms.

“We will be filing our petition for certiorari next week to the Supreme Court questioning LTOPF,” Ernesto Tabujara III, Pro-guns Secretary General, said in an interview at Camp Crame.

“Existing gun license owners from 10 to 20 years should not be required to secure LTOPF. LTOPF should be applicable only to individuals applying for gun ownership after the law was implemented,” Tabujara said.

“We’ve been trying our best to tell the PNP to give us the chance with our suggestion. We know the issue. We have been into guns for 20 years or so,” Tabujara lamented.

“(But) we were never given a chance to be heard. We were not allowed to be heard,” he added.

Gun group up in arms vs. PNP on license renewals