More teachers to lose jobs due to K-12 program 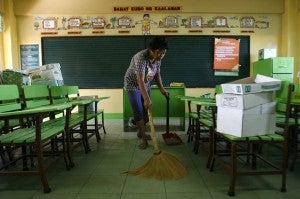 DAVAO CITY, Philippines — More teachers will lose their jobs under the K-12 program with the dropping of Filipino subjects in the general education curriculum, according to education and labor officials.

However, officials said the government has been doing what it could to cushion the impact on teachers.

Dr. Raul Alvarez, director of the Commission on Higher Education (CHED) in Southern Mindanao, said that of the existing 63 units of general education subjects, only 36 would be retained. This, he said, would “make the curriculum at par with the demands of the fast globalizing world.”

He refused to give the projected number of teachers who might be displaced by changes in curriculum.

He said that in Southern Mindanao alone, 96 higher education institutions, 80 of them private schools with less than 2,000 students enrolled per semester, would be affected with the full implementation of K-12.

“They’re most vulnerable to the implementation of K-12, especially in the first two years when no student will enroll for the first year because of the K-12,” Alvarez said.

Lawyer Benjo Santos Fernandez, director of the Bureau of Labor Relations of the Department of Labor and Employment (DOLE), said education and labor officials have been drafting a bill to cushion the impact of K-12 on teaching and non-teaching personnel who would likely lose their jobs.

He said the government has come up with a bill aiming to give financial aid to those who would be affected by the education reform program.

The draft bill, for instance, has proposed the grant of financial aid to higher education institutions (HEI) and the enactment of the Tertiary Education Sector Transition Fund, Fernandez said.

“The bill that we are proposing is made up of two components. First is providing complementary vouchers to public school students entering senior high school in private schools and the other is financial assistance to retained and retrenched teaching and non-teaching personnel,” he said, adding they would resort to retrenchment only as a “last recourse.”

Alvarez said the subjects proposed to be taken out of the general education curriculum included Filipino.

“Unfortunately, Filipino is included in the subjects to be dropped from the grades 11 and 12,” Alvarez said. “It is still an issue right now, and we’re having a series of consultations so that we can answer it at the national level as a policy, but you have to understand that the context of the new curriculum is presumed on the fact that students are ready for college,” he said.

Trillanes calls for suspension of ‘overly ambitious’ K to 12 program