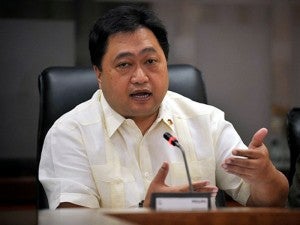 MANILA, Philippines–Cabinet officials said Wednesday the government would not face a possible power shortage in 2015 if the Supreme Court had not stopped the construction of a coal-fired power plant in Luzon two years ago.

The high court in August 2012 issued a writ of kalikasan stopping the Redondo Peninsula Energy Inc. (RP Energy) from constructing a $1.28-billion, 600-megawatt power project at the Subic Bay Freeport.

“Had the Supreme Court not TRO-ed the Ridondo power plant, which would have been on-stream, we wouldn’t even be facing this issue,” Finance Secretary Cesar Purisima told senators during a briefing on the proposed 2015 national budget.

That’s why it would be prudent for the executive department and Congress to study “how we can streamline the flexibility of the judiciary in stopping crucial infrastructure projects,” he added.

After the hearing, Budget Secretary Florencio Abad Jr. said the 600-mw Redondo power plant would have been more than enough to cover the projected shortage of 400 mw next year.

“If that project gets on-stream, we’re not talking about a possible crisis here. The issuance of a writ of kalikasan stops us from developing a remedy that should have answered the potential crisis in power supply,” Abad told reporters.

“What the President wants is that we should not be strictly legal about these things. Because those legal positions also have economic, financial and even political ramifications,” he added.

Citing the energy outlook for Luzon in 2014-2016, Petilla said that contingency reserves would run below the minimum level set by regulators in the middle of March next year. He predicted a deficit of 400 to 500 mw when the demand power peaks at 9,017 Mw next year.

In his July 28 State of the Nation Address (Sona), the President merely asked Petilla to coordinate with the Joint Congressional Power Commission, the Energy Regulatory Commission, industry players and consumers “to increase our capacity to respond to the problem.” He did not mention any emergency powers.

Purisima said the power crisis projected by Petilla was a “worst-case scenario” that was dependent on several factors such as an extreme El Niño, and unscheduled outage of power plants, among others.

“Assuming all of those happen, in the middle of next year, there is potentially a shortage of power,” Purisima told the finance committee, chaired by Sen. Francis Escudero.

Groups divided on how to deal with power crisis