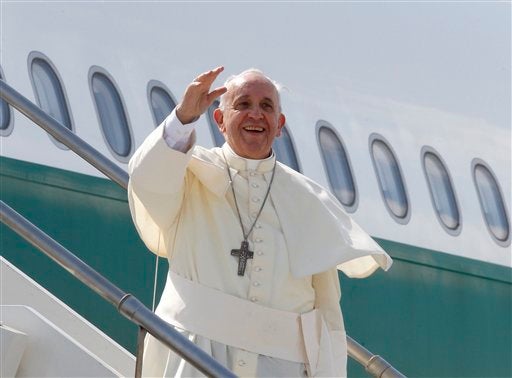 Communications between the Vatican and Beijing have never been easy or particularly fruitful, and the problem China poses for the Holy See’s plans to expand Church membership in Asia loomed large over the Pope’s first visit to the region, which wrapped up on Monday.

The trip to South Korea was partly planned to coincide with the gathering of thousands of young Asian Catholics for Asian Youth Day in the city of Daejeon.

Organizers said Beijing prevented a number of Chinese Catholics from traveling to the event and, according to some reports, participating Chinese priests were warned not to attend any function involving the Pope.

“In a particular matter like this we have to be discreet,” Vatican spokesman Federico Lombardi told Agence France-Presse (AFP) when asked to comment on the Chinese action.

China did allow Pope Francis to fly over China on his way to South Korea—a courtesy it did not extend to Pope John Paul II who was forced to fly around when he traveled to Seoul in 1989.

A call to dialogue

In line with papal protocol, that allowed Pope Francis to send a brief goodwill message directly to President Xi Jinping as he entered Chinese air space.

Although the message was widely reported by the international media, it failed to reach Xi due to some unexplained technical issue, and the Chinese Embassy in Rome ended up having to request its retransmission.

Although he did not directly address China during his five days in South Korea, the Pope made several remarks that were seen as reaching out to Beijing, including a call for dialogue with Asian nations that have no formal ties with the Vatican.

“You ask me if I want to go to China? Certainly, even tomorrow,” Francis later told reporters as he flew home.

“The Holy See is open to all contacts,” he said. “Because it has true esteem for the Chinese people.”

“But the Church asks for the freedom to do its job in China, there is no other condition,” he said.

Francis recounted how he had a front-row seat to history when his Alitalia charter flew through Chinese air space en route to South Korea on Aug. 14.

He recalled he was in the cockpit chatting with the pilots when the plane was about 10 minutes out of Chinese air space and it was time to request permission from the air traffic control tower to continue on.

“I was a witness to this,” Francis marveled. “And then the pilot said, ‘And now the telegram goes out.’”

After witnessing that, the Pope returned to his seat and prayed.

“I prayed so much for the beautiful and noble Chinese people,” he said.

Francis sent Xi a similar telegram on Monday heading back to Rome: “I wish to renew to your excellency and your fellow citizens the assurance of my best wishes, as I invoke divine blessings upon your land.”

China severed ties with the Holy See in 1951, and does not recognize the Vatican’s authority over its Catholic community.

Experts estimate that there are as many as 12 million Catholics in China, with about half in congregations under the officially administered Chinese Catholic Patriotic Association.

The rest belong to nonsanctioned or “underground” churches, with clergy loyal to the Vatican.

The main point of contention concerns the approval of bishops, where the Vatican sees its authority as absolute.

From China’s viewpoint, ceding control of such appointments would be tantamount to a loss of political sovereignty.

“And because China doesn’t really have civil society, social leaders there are seen as part of the government,” Lam said.

In unscripted remarks during a speech to Asian bishops on Sunday, Pope Francis stressed the dialogue he sought with countries like China was “fraternal” and not political.

“Christians are not coming to Asia as conquerors,” he added.

Despite such assurances, dialogue between the Vatican and Beijing has rarely risen beyond the level of low-level informal talks.

No miracles in relationship

“Goodwill is fine, but goodwill is not enough. There aren’t going to be any miracles in this relationship,” said Gianni Criveller, a Hong Kong-based Catholic theologian and watchdog of religious issues in China.

Criveller is “not very optimistic” of any breakthrough in the short term, partly because of the factional nature of Chinese politics, especially between hardline and more liberal elements.

“When the infighting breaks out, religion is one issue that can be used as an ideological weapon,” he said.

“So nobody in the leadership wants to be seen as compromising on something like religion as it will just hand ammunition to their critics,” he added.

And the Vatican is no stranger to factional politics either.

While some power brokers may push for some sort of accommodation with China, others balk at any move that could be seen as accepting government interference in the running of the Church’s affairs.

“There is great concern about setting a precedent,” Lam said.

Some feel the Vatican places too much emphasis on the idea of diplomatic relations with Beijing, a goal that prevents it speaking out too loudly about injustices in China for fear of alienating the government.

“My personal opinion is that no agreement is better than a bad agreement,” Criveller said.

“I would stop sending envoys around the world and focus more on supporting Catholics in China and speaking about their plight more openly,” he added.