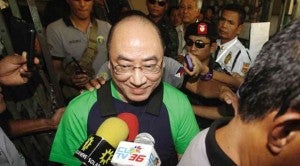 MANILA, Philippines—Detained real estate developer Delfin Lee asked the Supreme Court to allow him to attend a hearing by the Senate Committee on Urban Planning, Housing and Resettlement.

In compliance with the high court’s Aug. 5 resolution, Lee, in his comment, said attending the senate committee hearing will give him the opportunity to “present an honest, fair, truth and factual narration or account of the events that eventually led to our persecution, illegal arrest and unlawful detention.”

The case was taken to the Supreme Court.

“This has been long-overdue and I have been expressing my desire to be given the chance to at least present to the Senators and to the general public the truth behind all these alleged scam”, Lee said.

“Pag-IBIG’s unending efforts to mis-inform and mislead everyone will finally end should I be given the chance to lay down the real facts and true circumstances in the alleged controversy” Lee said.

“As the main subject of the (Senate) inquiry, I should be given the equal opportunity to present the real and truthful facts about all the allegations that have ruined my person, my enterprise and more importantly, my family” Lee added in his comment.

Lee, who was also arrested in Manila early this year is currently detained in the Pampanga jail.

He insisted that there is no subsisting criminal case against him.

He has a current petition with the Supreme Court questioning his arrest, detention and a bid to stop the trial for syndicated estafa for allegedly defrauding the government’s housing financier Home Mutual Development Fund (HDMF) and a number of homebuyers.

In his motion for early resolution he urged the high court that if quick resolution was not feasible, then, it should consider allowing his temporary liberty.

His motion insisted that his current detention lacks basis since the Court of Appeals already nullified the Information (charge sheet) against him for syndicated estafa.

“The lone Information for Syndicated Estafa in Criminal Case No. 18480 has already been quashed by the Court of Appeals in CA G.R. SP No. 121346… and that such lone Information has not yet been revived by the Honorable Supreme Court,” Lee noted in his recent motion.

Thus, he said there is no reason or legal justification for his continued detention as well as the ongoing trial before the Pampanga court.

Delfin Lee to ‘tell all’ at Senate hearing