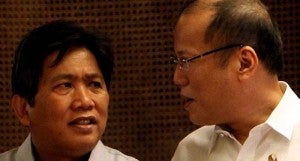 MANILA, Philippines – Amid an audit report questioning a Disbursement Acceleration Program (DAP)-funded project involving an organization co-chaired by President Benigno Aquino III’s sister, Malacañang on Tuesday said no exceptions are being made as the Commission on Audit (COA) investigates the matter.

“Like all citizens they are expected to follow the law,” Communications Secretary Herminio “Sonny” Coloma Jr. said of Aquino’s relatives, including Viel Aquino-Dee, who co-chairs the Assisi Development Foundation (ADF).

The ADF was the partner organization of the National Dairy Authority (NDA) in a milk feeding program sponsored by lawmakers through DAP funds.

Coloma, however, cautioned against insisting that there was any anomaly since the NDA has yet to respond to the audit findings.

“We expect the implementing agency, the National Dairy Authority, to respond to the audit findings, which shall serve as the basis for the Commission on Audit to finally determine if the funds allocated were properly utilized,” he said.