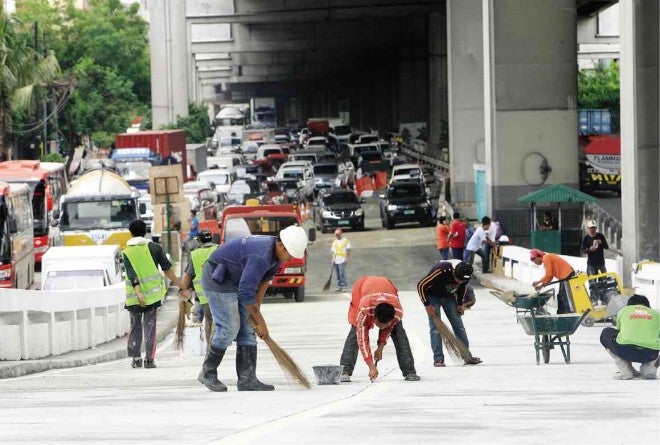 Workers put the finishing touches to the southbound lane of the Magallanes Interchange in Makati, which reopens Monday following 10 days of repairs but only for light vehicles. The infrastructure can be used by all types of vehicles starting Wednesday. MARIANNE BERMUDEZ

MANILA, Philippines–After 10 days of being closed for repairs, the southbound lane of the Magallanes Interchange will reopen Monday but only for light vehicles, the Metropolitan Manila Development Authority (MMDA) announced during its Sunday radio program on dzBB.

MMDA Traffic Engineering Center head Neomie Recio said that starting at 5 a.m., light vehicles would be allowed on the structure’s southbound lane. Medium and heavy vehicles, on the other hand, would have to stick for the meantime to alternate routes.

They would not have to wait for very long, however, as the southbound lane would be open to all types of vehicles starting Wednesday

According to the Department of Public Works and Highways (DPWH), the delay was to allow for the cement’s curing period, Recio said.

The DPWH closed down on Aug. 8 the southbound lane of the interchange to give way to repairs to strengthen the 39-year-old structure.

As a result, motorists bound for the South Luzon Expressway, Alabang and Muntinlupa were advised to use the Osmeña Highway-Magallanes Service Road which the MMDA opened before the start of the road repairs.

Recio said that the service road would remain open to medium and heavy vehicles until tomorrow.

“We are hoping that with the reopening of the southbound lane of the Magallanes Interchange, the traffic situation in the area will also improve,” she added.

Meanwhile, Cris Saruca of the MMDA Traffic Discipline Office said during the agency’s radio program that they would deploy more traffic enforcers to the Magallanes Interchange on Monday to ensure that only light vehicles would be allowed to pass through the flyover.