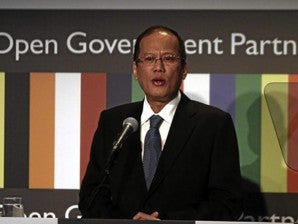 NEW YORK—As his favorite singer David Pomeranz puts it, “maybe the old songs will bring back the old times” for the country’s most powerful bachelor.

Maybe a full moon was out in this city that never sleeps but over coffee with reporters on Tuesday, President Benigno Aquino III once again allowed talk to stray from affairs of state to matters of the heart. He waxed sentimental over the recent engagement of his former girlfriend Shalani Soledad and Pasig City Representative Roman Romulo.

The 51-year-old President said news of the couple’s engagement reminded him of a favorite Pomeranz song, “Got to Believe in Magic.”

“I know this sounds cheesy and corny but there is a song I really like, “Got to Believe in Magic,” and it has a line that asks a question: ‘Tell me how two people find each other’—and in this case they found each other. One hopes the state they are in persists throughout their lives,” Mr. Aquino told reporters at his hotel here.

The President said he wished the couple well and that he meant it “in all sincerity.”

“I still ask myself how do people find each other. They found (each other) and one can’t help but really wish them well, that their union becomes strong and they achieve their fullest potential,” he added.

Would he go to their wedding if invited?

“Sorry, it’s a question that doesn’t really have an answer,” otherwise he would sound as though he was asking to be invited, he explained. Leave it all to the couple, he said.

Mr. Aquino and Soledad, a councilor of Valenzuela City and a constant eye-catcher in his presidential campaign, parted ways after a two-year relationship and shortly after he assumed the presidency in June last year.

Early this month, Representative Romulo, son of former Foreign Affairs Secretary Alberto Romulo, confirmed his engagement with Soledad and that he had given her the diamond engagement ring that his father gave his mother.

President Aquino and Soledad were last seen in public together early this month when they bumped into each other at the Dumaguete City airport as they both awaited flights back to Manila.

Being the country’s first bachelor President had apparently made Mr. Aquino an easy, high-profile target for wannabe matchmakers.

A chance with Shamcey?

And since he brought up the power of “magic” over lovers, was that Pomeranz song playing in the air when he briefly met with Miss Universe third runner-up Shamcey Supsup at the airport lounge in Manila before he flew to New York on Sunday?

“I asked her whether she was able to take a rest and she said she had no rest time that day,” Mr. Aquino said of his quick meet-and-greet with Supsup, who had just arrived from the contest held in Brazil. “That’s just what we talked about because we were both tired.”

But when broadcaster Rey Langit, part of the media pool covering the President’s New York trip and who was then celebrating his birthday, teasingly expressed a wish for the President to one day introduce the person whom he would finally settle down with, Mr. Aquino impishly replied:  “Shamcey is busy.”