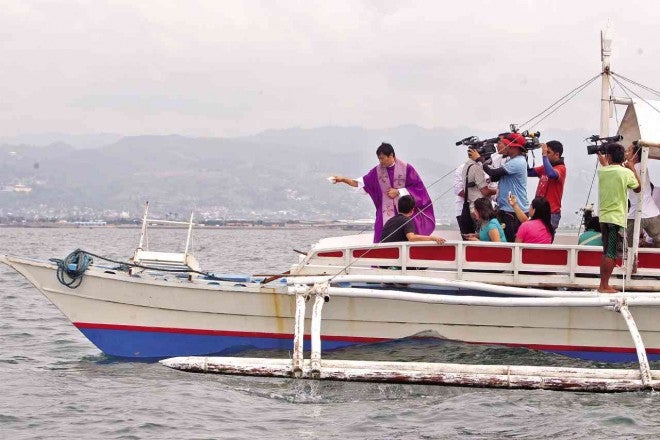 A priest celebrates Mass aboard a boat during the commemoration of the first anniversary of the Aug. 16, 2013 collision of two ships that killed 116 people. TONEE DESPOJO/CEBU DAILY NEWS

TALISAY CITY, CEBU, Philippines – Mass was celebrated aboard a boat on the site where at least 116 people died when the vessel MV St. Thomas Aquinas, of the transport firm 2Go, collided with a cargo ship on August 16 last year.

At least 50 people boarded boats and proceeded to the site of the tragedy on Aug. 16, 2013, that befell passengers of the Aquinas after the vessel collided with the cargo ship MV Sulpicio Express Siete of the Philippine Span Asia Carrier Corp. (PSAC, formerly Sulpicio Lines).

The group that commemorated the tragedy’s first anniversary threw flowers into the water, off Lawis Ledge here, and offered prayers for the dead.

2Go was scheduled to also offer Mass at Pier 4 in Cebu City.

The officials of the shipping line were expected to proceed to the Carreta Cemetery in Barangay Calamba in Cebu City where some of the dead had been buried.

Sulpicio Express Siete was headed for Davao City while Aquinas was headed for the Cebu City pier when they collided in the evening of Aug. 16 last year.

The Aquinas later sank, spilling millions of liters of oil into the water, the spill reaching Cordova, a mainly fishing town in southern Cebu province.