‘My daughter suffered; why is NBI coddling Palparan?’ 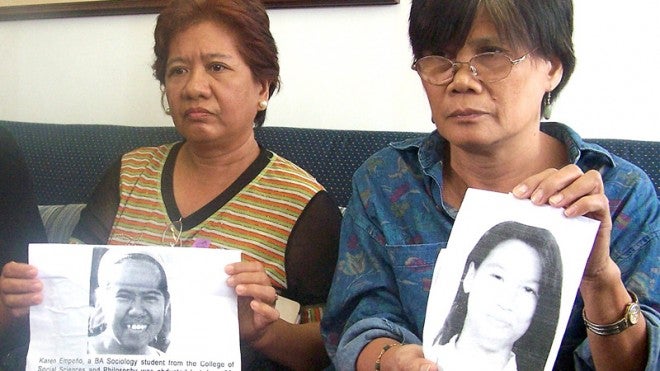 Concepcion Empeño (center) and Erlinda Cadapan, mothers of missing UP students Karen Empeño and Sherlyn Cadapan hold pictures of their daughters during a meeting with Sen. Mar Roxas. The mothers are seeking help from Roxas to find their missing children who were believed abducted by the military in Bulacan. RODEL ROTONI

MANILA, Philippines—“My daughter suffered inhuman treatment. She was hung upside down. And they did other things [to her],” Erlinda Cadapan, mother of missing University of the Philippines student Sherlyn Cadapan, told the media on Friday, her voice breaking as she expressed objection to retired Maj. Gen. Jovito Palparan’s motion to remain at the National Bureau of Investigation (NBI).

Sherlyn, fellow UP student Karen Empeño and farmer Manuel Merino were allegedly kidnapped in Bulacan by soldiers under the command of Army Maj. Gen. Jovito Palparan on June 26, 2006.

Cadapan called Palparan a coward after opposing his transfer to the Bulacan provincial jail for security and health reasons.

“Why is the NBI protecting him? Does it mean he’s being coddled? What about us, were we given protection by the NBI or the government? It’s infuriating,” Cadapan said at the press conference held by the families of victims of extrajudicial killings and enforced disappearances allegedly perpetuated by troops under Palparan.

The Supreme Court had ordered the military to release Cadapan, Empeño and Merino but Palparan and other military officials had denied that the victims were in their custody.

“When I first saw how (Palparan) looked on TV, I felt pity for him,” said Concepcion Empeño, Karen’s mother. “But it doesn’t mean I’ve forgiven him.”

“He must be detained in a regular jail. Don’t give him special treatment so he could feel what he had done to our daughters and the other victims,” Empeño said.

Edre Olalia, a private counsel for mothers Cadapan and Empeño, said the case against Palparan was significant because “this is the first time that a high-ranking military officer has ever been indicted, arrested and, hopefully, convicted criminally for violation of human rights.”

Palparan was arrested in Sta. Mesa, Manila, on Tuesday after almost three years in hiding.

“I waited 11 years to see (Palparan) in jail,” said Orly Marcellana, husband of Eden who was killed in 2003.

Eden, secretary general in Southern Tagalog of the human rights group Karapatan, and peasant leader Eddie Gumanoy were abducted in Mindoro Oriental allegedly by men under Palparan’s command. They were found dead the following day.

“He’s not human, he’s an animal,” a seething Marcellana said of Palparan. “He should be brought immediately to the Bulacan provincial jail.”

Marcellana had filed a case against Palparan but it did not prosper in the Department of Justice under then Secretary Raul Gonzalez. He said he would support the case of Sherlyn and Karen to see the conviction of Palparan.

Olalia said the government should also act fast on the case of farmer Raymond Manalo and his brother Reynaldo which is pending in the Ombudsman since 2008. Both escaped from the custody of the military.

Raymond testified that he saw Cadapan being tortured, heard Empeño’s screams and saw Merino being set on fire.

Karapatan secretary general Cristina Palabay said they are studying filing new cases against Palparan under the Anti-Enforced or Involuntary Disappearance Law of 2012.

Palabay also belied President Aquino’s claim that there are no longer butchers in the military, citing victims of extrajudicial killings under his administration.

“Karapatan has documented 204 victims of extrajudicial killings and thousands of cases of human rights violations under the Aquino administration—all these because of Aquino’s counterinsurgency program Oplan Bayanihan, a copycat of Arroyo’s Oplan Bantay Laya, which Palparan implemented,” Palabay said.