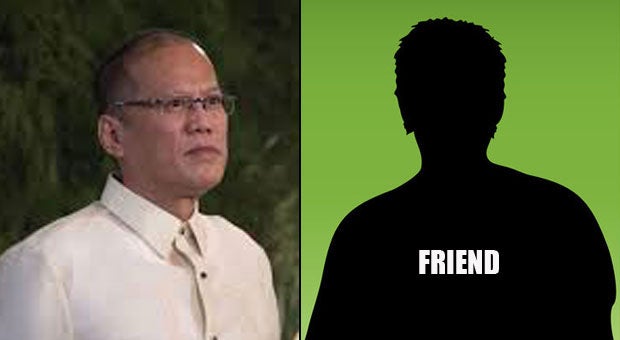 MANILA, Philippines–President Aquino wants a “friend,” not a foe, to replace him in 2016.

Aquino made that clear in Thursday’s continuation of his interview with the TV5 network where he also sought to play down reports that his sisters were endorsing Vice President Jejomar Binay, who had long declared that he would run for president in 2016.

Aquino said he phoned his sisters Ballsy and Kris and was told, “[The] media just forced us to say something.”

“The gist of what they said was, ‘If [Binay] would continue what our brother had done, thank you,’ or ‘it would be good’—which is not exactly the same as, ‘You should continue [what he had started],” Aquino said in Filipino.

Noting that he still had a year and 10 months left in office, the President kept his cards close to his chest on who he was eyeing to replace him, even if he himself was entertaining the possibility of a term extension.

In the first part of the TV interview on Wednesday, Aquino said he was now open to amending the Constitution to lift the presidential term limit and to clip the Supreme Court’s power of judicial review.

His statements have drawn criticism from Binay’s camp, legal circles and the Catholic Church.

Polls show that the ruling Liberal Party’s presumptive presidential candidate in 2016, Interior Secretary Mar Roxas, is unpopular with the electorate, leaving Aquino as the party’s only hope of keeping Binay out of Malacañang.

But Aquino did not say that he was going to run for a second term.

Still, his Liberal Party (LP) allies wasted no time and called a party caucus at its “Balay” headquarters in Quezon City.

“Now that the President has spoken, we will discuss this matter with the party so that we will be able to come up with a collective decision on the issue. Most likely, most of the members will support it,” Samar Rep. Mel Senen Sarmiento, the party’s secretary general, said in a text message.

There are 116 LP members, or 40 percent, in the 290-strong House of Representatives.

In the continuation of the TV interview on TV5 on Thursday, Aquino gave an idea of the kind of successor he preferred.

“Perhaps, the one that I would ask [to replace me] would be a friend of mine, not my enemy,” he said. “[But] I could promise him that there would be a big difference between [the kind of government] that I inherited and the one that he would.”

Binay said he was also open to tapping Roxas for a running mate in the event that his United Nationalist Alliance joined forces with the LP.

“Nothing is impossible in politics. Everything is possible,” Binay said.

Aquino said that while the Constitution has provisions that need “fine-tuning,” it is possible that “the good [ones] might be diluted.”

“Once you open one part, everything else follows,” he said. “Now, before you risk the good [provisions], you have to show that there’s an imperative, that it’s very important to change [a certain provision] because it poses danger to the people.”

“If that cannot be shown, perhaps it would not be right to risk the good provisions,” he said.

The LP’s Sarmiento said that he fully supported the President’s move to amend the Constitution not only to clip the powers of the Supreme Court but also to allow him to run for a second term if there was a strong public clamor for it.

But some LP leaders, notably Speaker Feliciano Belmonte Jr., who pushed for Charter change though only to amend economic provisions, have yet to make up their minds on a second term for Aquino.

“I’m still trying to take it all in. It’s not so easy to amend the Constitution,” said Belmonte who, prior to the President’s announcement, dismissed talks of amending the one-term limit as “hot air.”

Iloilo Rep. Jerry Treñas, one of the leaders of the LP’s Visayas bloc, was optimistic that the President’s announcement would “solidify” the party’s stand on Charter change. “At least he said that he’s open. That is already a sign for us LP members to go back to our districts and make consultations at the grassroots level. If there is strong demand and general support, then we can move forward,” Treñas said.

Caloocan City Rep. Edgar Erice, who was among the first to push the “One More Term” clamor, cheered the President’s statement.

“I’m sure it will gather support in both houses. We have a determined President with a strong sense of political will. This is democracy in action. Exciting turn of events,” Erice said.

“The President cannot just let the process of transformation and progress be wasted as the remnants of the traditional corrupt leaders are salivating on the prospect of returning to their old ways,” he said.

Aggabao said Aquino’s idea of amending the Constitution to extend the presidential term limit was not “unprecedented.”

“FVR tried it before, with disastrous results. This time, it’s different. I sense there is a genuine interest from many sectors to give [Aquino] another term,” said Aggabao, a representative from Isabela and member of the Nationalist People’s Coalition.

He said the reason proffered by the President for Charter change, to protect the executive from judicial overreach, was “actually very astute.”

“His reason would resonate well in Congress because many members also believe the power of judicial review has made the Supreme Court overly powerful and that there is a serious need to clearly set the parameters of the balance between Congress and the judiciary,” Aggabao said.

“Of course, [Aquino’s Charter amendment] would surely connect with other amendments as well, like the changes to economic provisions that the Speaker has been pushing. Overall, I think the time for [amendments] has come,” he said.

In his final years in office, Ramos attempted to muster support for constitutional amendments allowing a term extension but widespread protests led by Aquino’s mother, the late President Corazon Aquino, thwarted him.

It was just a joke

Akbayan Rep. Walden Bello believes Aquino was just joking when he said he was now open to constitutional amendment and a second term.

“I think the President is just having a bit of fun, having his allies, the opposition and the media hanging on to his every word,” said Bello, a member of the ruling coalition in the House. “If I were in his place, I’d get my kicks the same way.”

Bello said he pitied Binay, who “must be having sleepless nights.”

He, however, made it clear that Akbayan was opposed to any changes in the 1987 Constitution that would allow Aquino to run for a second term.

“The man’s not ambitious,” he said, referring to Aquino.

But other lawmakers took the President’s words seriously.

“This is Aquino’s Arroyo moment. His complete reversal on his declared stand against Charter change in order to seek another term echoes former President Arroyo reneging on her Rizal Day promise not to run again,” he said.

Arroyo famously pledged on Dec. 30, 2002, that she would not run in the 2004 elections, a promise she eventually broke.

“This is Aquino breaking his oath to preserve and defend the Constitution,” Tinio said.

On the other hand, Kabataan Rep. Terry Ridon found a parallel to Aquino’s position in another former president.

“Aquino’s duplicity reminds us of how [Ferdinand] Marcos used good intentions to justify a term extension. We all know how that part of history played out,” he said.

“Aquino is delusional. He thinks that he is the sole guardian of the Philippines and that the Filipino people are calling for him to extend his term and save us all from unspeakable evils. Mr. President, the calls for your reelection are coming from your own backyard. The vast majority of the Filipino people actually want you out,” Ridon said.

“Six years is too short for a good president. And President Aquino is a very good President. We should sustain the momentum of our economic growth to benefit the larger masses of our people,” he said.

“Charter change is very doable either through a people’s initiative or constituent assembly. Now that President Aquino has spoken, we can expect an avalanche of support from various sectors of society, especially in the grassroots level,” Evardone said.

Sen. Sonny Angara, an administration ally, said Aquino and the Liberal Party may just be testing the waters when they floated the idea of a second term.

“[It must be a trial balloon for] term extension [and they want to] see if it will fly with the public. Whether it will fly or not, well, that remains to be seen,” Angara said.

He said Aquino may have realized that he wanted to do more as he neared the end of his term, but the President’s openness to a second term did not mean he would actually run again.

Transportation and Communications Secretary Joseph Abaya said he supported the idea of a second term for Aquino.

“He is our chairman. What is consistent in the LP is we have a personal stake and we will ensure that [good government] will continue,” Abaya said.

He denied that the LP has no presidential candidate in 2016.

Malacañang rejected the idea that President Aquino was now open to a term extension only because of the administration’s “shallow bench,” particularly the idea that Roxas was unlikely to win the 2016 presidential election.

Communications Secretary Herminio Coloma said “the more correct perspective” was the President’s “desire to continue the reforms he has started and ensure that they become permanent.”

“On the issue at hand, what’s important for the President is to get the public pulse. That is what’s primarily on the mind of our President,” Coloma told reporters.

Coloma kept repeating the same line when bombarded by questions on the President’s apparent change of mind.

He said entertaining ideas for another term to continue the reforms he had started did not indicate the President’s “messianic tendencies.”

“He didn’t say that only he would do that,” Coloma said. “His platform [of government] is his social contract with the Filipino people. What he said was his objective to change and provide transformation to our society.”

Asked if Binay should feel “insulted” by Aquino’s new openness to term extension, Coloma said: “The Vice President himself issued a statement saying he respects the President’s decision.”

Coloma insisted that Aquino remained “consistent” with his desire to “listen to his bosses” as “one of the basic principles of his governance.”–With reports from Gil Cabacungan, DJ Yap, Leila B. Salaverria and Miguel Camus