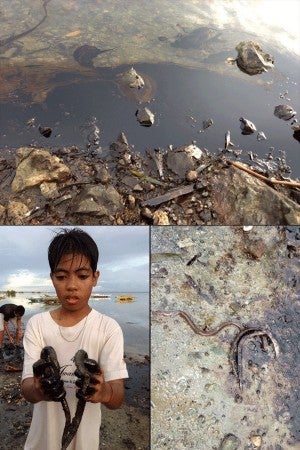 CEBU CITY, Philippines — The Cordova municipal government and fisherfolk groups filed on Thursday a multi-million-peso damage suit against the owners of two sea vessels that collided and leaked oil in 2013, damaging the town’s marine environment.

They asked the environmental court in Mandaue City to order the 2GO Group Inc. and the Philippine Span Asia Carrier Corp. (formerly Sulpicio Lines) to jointly pay $3 million (about P132 million) for the complete rehabilitation of the Cordova’s marine environment.

The fisherfolks also sought separate payment of at least P81 million to cover their “loss of livelihood.”

The petitioners said the oil leak from MV St. Thomas Aquinas of 2Go, which sank after it was hit by the MV Sulpicio Express Siete of PSACC “irreversibly disrupted” the town’s marine ecology on which their economy has been dependent.

The Philippine Daily Inquirer tried to reach Manila-based lawyer Dennis Cabanos of the 2GO Group Inc. but he did not answer the calls. A text message sent to his cell phone was also left unanswered.

PSACC lawyer Jaime Vibar, on the other hand, earlier said the oil that leaked into the sea did not come from their vessel, MV Sulpicio Express Siete.

He said the Cordova municipal government should instead hold the 2GO Group Inc. accountable.

Aside from the two shipping companies, also impleaded in the case were the Department of Environment and Natural Resources (DENR), the Maritime Industry Authority (Marina), and the Philippine Coast Guard (PCG).

Lawyer Benjamin Cabrido of the Philippine Earth Justice Center said the three government agencies failed to carry out what they were supposed to do.

“They just keep on delaying things. So now, we’re asking the court to compel these government agencies to perform their mandate under threat of contempt,” said Cabrido, whose law firm represents the fisherfolks.

The petitioners are seeking the issuance of a temporary environmental protection order (Tepo), an order issued by the court directing any person or government agency to perform or desist from performing an act in order to protect, preserve, or rehabilitate the environment.

Cabrido has asked the court to constitute a special fund equivalent to $3 million, which shall be sourced by MARINA from the “Protection and Indemnity Insurance” of the two shipping companies.

The St.Thomas of Aquinas of 2GO was carrying 20 tons of diesel oil and 120 tons of bunker oil when it sank in the vicinity of Lawis Ledge, Talisay City, after colliding with the cargo vessel MV Sulpicio Express Siete last Aug. 16, 2013.

At least 116 passengers were killed and 21 others were missing. The collision caused an oil spill that affected mangroves and polluted the coastline of Cordova town.

Eleven of the 13 barangays of Cordova town were affected by the oil spill, which covered about three hectares and displaced about 5,000 fishermen in the coastal municipality.

For weeks, fisherfolk and vendors in Cordova were left without livelihood and had to depend on government aid to survive after the collision.

Most residents in this 3rd class municipality on Mactan Island, Cebu earns a living from fishing, shell collecting, and guso (seaweed) farming.

The town, however, paid P4.3 million in filing fee.

Cabrido said the 2GO Group Inc. and the Philippine Span Asia Carrier Corp. should be made to pay for the cost of the “clean-up, protection, restoration, and rehabilitation” of Cordova’s marine ecosystem.

He was also seeking the creation of a commission or special task force composed of the DENR, MARINA, and PCG in coordination with the Municipality of Cordova to immediately develop and formulate a preliminary action plan aimed at preventing the further degradation of the town’s marine environment.

The PCG should be directed by the court to submit within five days a report on the volume of bunker fuel and stored oil left inside the sunken vessel, he added.

“We believe there are still remaining bunker fuel and oil in the sunken ship. They may still pose an imminent threat to the marine environment of Cordova and the adjoining coastal towns,” Cabrido said.

Cabrido said the DENR should submit to the court the “latest situationer or preliminary report” on the extent of the damage left by the oil spill and conduct “programmatic studies” for the complete rehabilitation of the affected marine areas.