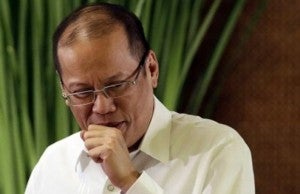 MANILA, Philippines—President Benigno Aquino III’s recent pronouncement of wanting to clip the powers of the Supreme Court and openness to a term extension is leaning toward dictatorship, Integrated Bar of the Philippines (IBP) President Vicente Joyas said.

In a phone interview Thursday, Joyas said Aquino’s pronouncement shows his little or no regard for the rule of law.

“This is really dangerous especially if his main purpose is to curtail the judiciary, especially the Supreme Court. It seems that they want a government that is similar during the martial law years,” Joyas said.

The power, which Aquino apparently wanted to clip, is Section 1 of Article VIII which contains definition of judicial power that had not been found in previous constitutions.

The provision states that “Judicial power includes the duty of courts of justice to settle actual controversies involving rights which are legally demandable and enforceable, and to determine whether or not there has been a grave abuse of discretion amounting to lack or excess of jurisdiction on the part of any branch or instrumentality of the government.”

It allows the Supreme Court to check grave abuse of discretion that may be committed by any branch or instrumentality of the government and use it as basis to nullify governmental acts.

Ironically, Joyas said it was Aquino’s mother, the late President Corazon Aquino who moved to put such provision in the 1987 Constitution as a protection for the country against the abusive Executive branch of government.

“He is contradicting his own mother,” Joyas said.

Joyas heads the IBP, a national organization of lawyers in the country with some 40,000 members.

Joyas said Aquino’s move was an offshoot of the unanimous ruling of the Supreme Court junking the controversial Disbursement Acceleration Program which some sectors claimed was used by Malacanang to bribe lawmakers into voting for the impeachment of Chief Justice Renato Corona in 2012.

He said the President’s reasoning is wrong and too simplistic, adding that with this development, the public whom Aquino called as his “bosses” would further doubt his ability to lead the country out of the many problems currently besetting it.

“Just because the Supreme Court declared the DAP as unconstitutional you would do things like that. What comes into my mind ay lalo lang magkakaroon ng doubt ang mga tao sa kanyang capability to govern the country and respect the rule of law,” Joyas added.

Likewise, Joyas stressed that Aquino’s popularity is no longer the same today compared to when he took over the presidency in 2010 when he was riding the wave of popular support generated by his reform-minded agenda after the many scandals that wracked the nine-year presidency of Gloria Macapagal-Arroyo.

He said Malacanang is apparently living in a make-believe world of its own if it believed that Aquino still enjoys the popular support he once had.

For his part, lawyer Edre Olalia, the secretary general of the National Union of People’s Lawyer, questioned what voices Malacañang heard that reportedly support moves to amend the Charter considering the plunge in Aquino’s popularity rating.

Olalia said Aquino and his advisers might be using these “voices” to hide the fact that he is actually angling for another term after 2016.

“Especially with a dive in his popularity, Aquino might be hearing voices or seeing people when he not too coyly hinted he is actually drooling for a second term, thus, delay his accountability, and pat his own back all along. These, while gouging the eyes of Lady Justice and gagging the mouth of the Supreme Court courtesy of his attack dogs,” he added.