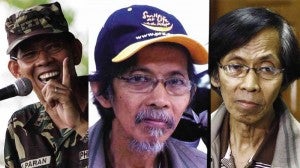 Retired Maj. Gen. Jovito Palparan, wanted for the disappearance of two University of the Philippines students, at the height of his power (left) commanded forces believed to have abducted and summarily executed activists. INQUIRER FILE PHOTO/NBI PHOTO/JOAN BONDOC

MANILA, Philippines—The husband of a slain human rights activist heaved a sigh of relief, on Wednesday, over the arrest of retired Major Gen. Jovito Palparan Jr., but he vowed to vigilantly pursue justice for those who were killed allegedly by Palparan under the government’s counter-insurgency campaign.

Orly Marcellana, husband of Eden Marcellana who was the secretary-general of the group Karapatan-Southern Tagalog, joined a picket protest at the National Bureau of Investigation on Taft Avenue in Manila at around 10 a.m. Wednesday, with other Karapatan members and militant groups to demand justice for their fallen comrades, whose deaths they blamed on Palparan.

Marcellana, a farmer who lives in Quezon, expressed belief that Palparan killed his wife because she was a vocal critic of the retired general. “Palparan texted her, saying that he would kill her if she ever laid a foot in Mindoro,” said Marcellana.

Eden and a peasant activist, Eddie Gumanoy, the chairman of the Katipunan ng Samahang Magbubukid sa Timog Katagalugan (Gathering of Peasant Groups in Southern Tagalog) were killed in 2003 in Oriental Mindoro.  Eden also left behind two children, both girls, ages 16 and 18.

Participants of the rally were carrying photos of Palparan’s other alleged victims who were either killed or missing. Most were members of activist groups.

“Palparan claims these people were members of the New People’s Army. How can we verify that now that they are dead or missing?” said Karapatan spokesperson June Ver Mangao.

Marcellana said that for now, he and others wanting justice for their slain loved ones could only monitor Palparan’s case.

“Palparan should not be given any kind of special treatment. If that happens, you will see more of us protesting on the streets,” said Marcellana.