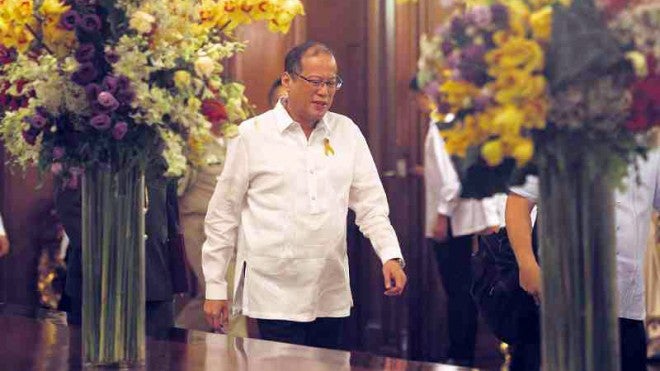 SOLDIERING ON Despite the net satisfaction rating of his administration dropping to its lowest level, President Aquino continues to perform his duties, including the swearing in of newly promoted generals led by Armed Forces of the Philippines chief of staff Lt. Gen. Gregorio Pio Catapang at Rizal Hall in Malacañang on Monday. RYAN LIM/MALACAÑANG PHOTO BUREAU

MANILA, Philippines–Belittling the Aquino administration’s lowest satisfaction rating since 2010, Malacañang on Monday expressed confidence that it would not diminish the power of President Aquino’s endorsement in the 2016 elections.

Presidential spokesman Edwin Lacierda said the elections were still “too far away” for Aquino’s endorsement to be affected by the drop in public satisfaction with the national government.

“Everyone wants his anointment,” he said in a press briefing.

Vice President Jejomar Binay earlier said he was open to a coalition between his United Nationalist Alliance (UNA) and the President’s Liberal Party (LP) for his presidential run in 2016.

But Interior Secretary Mar Roxas, the presumptive administration standard-bearer lagging behind Binay in the surveys, appeared cool to the idea.

Lacierda said the Palace was not bothered by the latest Social Weather Stations (SWS) survey showing a +29 net satisfaction rating in June, down from +45 in March.

The survey used face-to-face interviews with 1,200 adults nationwide. It had a margin of error of plus-or-minus 3 percentage points.

Results of the survey, conducted from June 27 to 30 and first published in BusinessWorld showed that 56 percent of the respondents, said they were satisfied with the performance of the government, 26 percent were dissatisfied and 18 percent were neither satisfied nor dissatisfied, resulting in a “moderate” plus 29 net satisfaction rating.

“Is it insurmountable? No, of course not,” he said. “We’re not going to be paralyzed by any survey. Our commitment is there to protect the welfare of the Filipino people.”

Lacierda described the SWS survey results as a “snapshot” of the “landscape at the time the survey is taken.”

“It varies … so we will always be committed and we will be undeterred in performing and committing to serve the Filipino people,” he said.

The results may be a record low for the administration, but Lacierda preferred to look at it as the “highest” satisfaction rating compared with Aquino’s predecessors.

“It is still considered the highest of the lowest among the other previous administrations,” he said.

Senate President Franklin Drilon, an LP official, said the President’s endorsement would propel Roxas’ ratings and make him a viable administration candidate in 2016.

“I would like to think it will,” Drilon replied when asked if the President’s anointment would raise Roxas’ flagging ratings in surveys.

“The endorsement of the President… whoever he will endorse will benefit [from it],” he told reporters after a forum at the Diamond Hotel.

In a June 24 to July 2 Pulse Asia survey on the top choice for President, Roxas ended up last, with 7 percent behind Binay’s 41 percent, Sen. Grace Poe’s 12 percent and Manila Mayor Joseph Estrada’s 9 percent.

Aquino has yet to announce his choice, but most party members preferred Roxas to be the standard-bearer, Lacierda said in June.

Without naming anybody, Budget Secretary Florencio Abad, another LP stalwart, said a presidential endorsement would be an advantage for the administration candidate.

“An endorsement from a popular and an indisputably incorruptible president is a huge advantage for any candidate running for President,” Abad said in a text message.

The 2016 presidential election is seen as a possible rerun of the bitter rivalry between Binay, who has announced plans to run for President, and Roxas. The interior secretary lost to Binay in the 2010 vice presidential race.

Roxas would carry the flag for the LP, the acting party president, Transportation Secretary Joseph E. A. Abaya, said in March.

Drilon, LP vice chair, announced in January 2013 that Roxas would be the party’s standard-bearer in 2016.

LP for someone winnable

A party member in the House of Representatives, however, disputed observations that the LP was solid behind Roxas, saying some party members were lukewarm to the secretary.

“They’re looking for someone winnable,” said the lawmaker, who asked not to be named because he was not authorized to speak on the matter.

Drilon, meanwhile, quashed any talk of a possible tandem between Binay and Roxas in 2016.

“We never talk about it. We have our own process in the party, and that is the process that we will follow. We have not discussed that. And ultimately, as I said, the President’s views on this matter will greatly influence the decision of the party,” he said. “At this point, I have not heard of any member of the party proposing that (tandem).”

Neither is the party talking about adopting Binay, Drilon said.

Binay earlier said he was open to the idea of having Roxas as his running mate. Roxas shot this down, claiming that UNA’s agenda runs counter to the party’s reform agenda.–With a report from Ana Roa, Inquirer Research