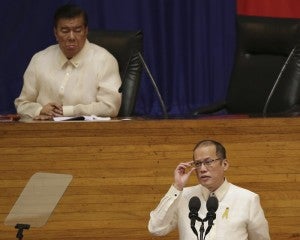 President Benigno Aquino III, bottom, adjusts his glasses as Senate President Franklin Drilon looks on during his 5th State of the Nation Address during the joint session of the 16th Congress at the House of Representatives in suburban Quezon city, north of Manila, Philippines Monday, July 28, 2014. AP FILE PHOTO

“Social media has been very active [on pushing for a second term] but the president is averse to amending the constitution,” Drilon said in a media forum.

“I don’t see this proposal in social media getting very far,” he said.

Aside from social media posts calling for a second term for Aquino, Department of Interior and Local Government (DILG) Secretary Manuel “Mar” Roxas II also expressed in a televised interview his personal opinion that Aquino should get a second term.

Vice-President Jejomar Binay called the proposal for a second term as “selfish” and “motivated by personal rather than national interest.”

“It was also unfair to the President. The proposal put him on the spot and made him the object of criticisms, which he doesn’t deserve,” Binay said.

An ally of Aquino cited that it would be a good time to amend the constitution because Aquino is widely trusted as an “honest and effective leader.”

“This is the best time to change the Constitution because we may never have another chance to have a President who is proven not only as an honest and effective leader but also one who has no other ambition but to turn the Philippines into a great and progressive nation,” Iloilo Representative Jerry Treñas said.

“We are sure that he will never abuse power. I think that we should not waste this opportunity,” he said in a statement.

The 1987 Philippine Constitution gives the president only one six-year term after former President Ferdinand Marcos stayed in office for 20 years.