Pope Francis ‘dismayed’ by violence and suffering in Iraq 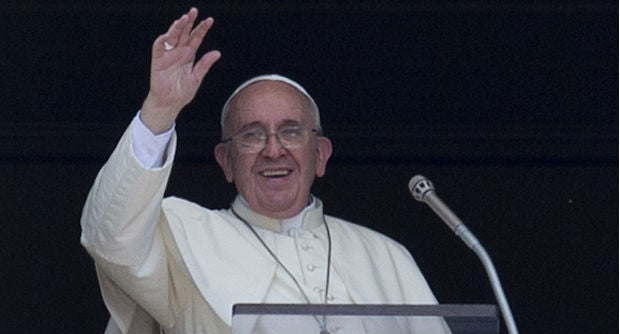 Pope Francis delivers his blessing during the Angelus noon prayer he celebrated from the window of his studio overlooking St. Peter’s Square, at the Vatican, Sunday, Aug. 10, 2014. AP/Andrew Medichini

VATICAN CITY – Pope Francis expressed “dismay and disbelief” on Sunday over the violence in Iraq, calling for an “effective political solution” to a crisis which has forced thousands to flee their homes.

Giving the traditional Angelus prayer in St Peter’s Square at the Vatican, the head of the Roman Catholic Church renewed his call for prayer and assistance for those hit by the conflict.

“The news reports coming from Iraq leave us in dismay and disbelief: thousands of people, including many Christians, driven from their homes in a brutal manner; children dying of thirst and hunger in their flight; women taken and carried off; violence of every kind,” he said.

Hundreds of thousands of people have fled their homes in northern Iraq due to the rapid advance of jihadists from the Islamic State (IS).

On Thursday, around 100,000 were forced to abandon the city of Qaraqosh, which had Iraq’s largest Christian population.

Thousands of members of the minority Yazidi community also fled into the mountains to escape the militant advance.

With concerns growing for those still trapped in the region, the pope said he had nominated Cardinal Fernando Filoni as his “special envoy” to travel to Iraq on Monday “in order better to ensure those dear suffering populations of my closeness to them”.

A statement released by the Vatican late Sunday said the pope had given the cardinal “personal guidance” for the mission, as well as an unspecified sum of money to be given to those worst affected by the upheaval.

The statement added that the money was “a concrete sign of the pope’s solidarity and his participation in the efforts of institutions and people of good will to respond to this tragic situation”.

Filoni, a former papal nuncio to Iraq, is due to visit Iraqi Kurdistan, where the majority of Christian refugees are sheltering.

The pope said he was “confident that an effective political solution on both the international and the local levels may be found to stop these crimes and re-establish the (rule of) law,” and thanked those who “are bringing succour” to those who are suffering.

He discussed the fighting in Gaza, which he described as “a war that cuts down innocent victims and does nothing but worsen the conflict between Israelis and Palestinians”.

And he also mentioned the battle against Ebola, which has killed close to 1,000 people in west Africa, calling on his followers to “pray for the victims of the Ebola virus and for those who are fighting to stop it”.

A Roman Catholic priest from Spain who caught the virus in Liberia is currently receiving treatment in isolation at a hospital in Madrid.

A number of other missionaries and health workers are among those who have either caught or died from the virus.