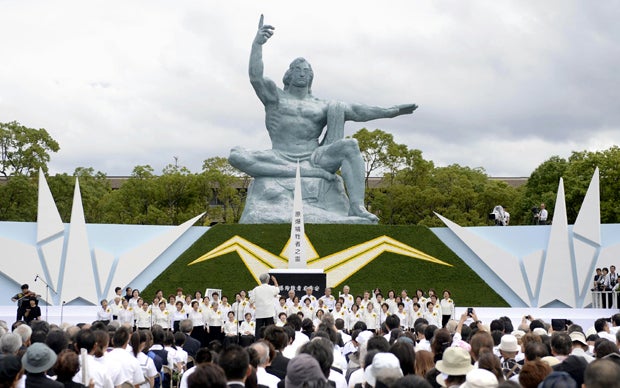 People listen to chorus during a ceremony in front of the Statue of Peace at Nagasaki Peace Park to mark the 69th anniversary of the world’s second atomic bomb attack, in Nagasaki, southern Japan Saturday, Aug. 9, 2014. (AP Photo/Kyodo News)

TOKYO — Tens of thousands marked the 69th anniversary of the US atomic bombing of Nagasaki on Saturday, as the city’s pacifist mayor urged the Japanese government to listen to increasing concerns over controversial plans to expand the role of its military.

Crowds gathered to remember the more than 70,000 people who died in the initial blast or from after-effects in the months and years following the bombing, which hit Nagasaki at 11:02 a.m. local time (0202 GMT).

Bells tolled as ageing survivors, relatives, government officials and foreign delegates observed a moment of silence at the time of detonation that turned the Japanese city into a ball of flames.

The ceremony, attended by Prime Minister Shinzo Abe and US ambassador to Japan Caroline Kennedy, went ahead despite a powerful typhoon churning towards the region whipping up strong winds.

“I would like to act as a storyteller,” Yasuhiko Yuge, a 74-year-old survivor of the bombing said. “Young people have interest but their opportunities to know about the history of the bombing are limited,” Yuge was quoted as saying by Jiji Press.

Another survivor, aged 71, told Jiji: “Peace has become common and the number of stories of survivors has declined. I think we can understand each other by placing importance on peace.”

In a speech at the ceremony, Nagasaki Mayor Tomihisa Taue called for a nuclear-free world and underlined concerns about the government’s decision last month to allow its military to go into battle in defence of allies. 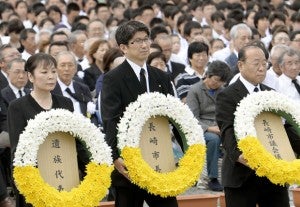 Tokyo’s move to invoke the right to exercise so-called “collective self-defense” came despite widespread public opposition and fears among people in neighbouring China and South Korea, which regularly accuse Japan of failing to atone for its aggressive wartime actions.

“The oath prescribed in the Japanese Constitution that Japan shall renounce war is the founding principle for postwar Japan and Nagasaki,” Taue said.

“However, the rushed debate over collective self-defence has given rise to the concern that this principle is wavering,” the mayor said.

“I urgently request that the Japanese government take serious heed of these distressed voices,” he said.
The ceremony was held near the spot where the US military dropped a plutonium bomb nicknamed “Fat Man” on August 9, 1945. Japan surrendered six days later, ending World War II.

The bombing of Nagasaki came three days after the first-ever atomic blast at Hiroshima, which claimed 140,000 lives.

Opinion remains divided over whether the twin attacks were justified. While some historians say it prevented many more casualties in a planned land invasion, critics have said the attacks were not necessary to end the war, arguing that Japan was anyway heading for imminent defeat.

Washington, which has been a close ally of Tokyo since the war, has never officially apologized for the bombings, however, leaked diplomatic cables from 2009 suggested that the Japanese government had rebuffed the idea of a US apology and a visit to Hiroshima by President Barack Obama.