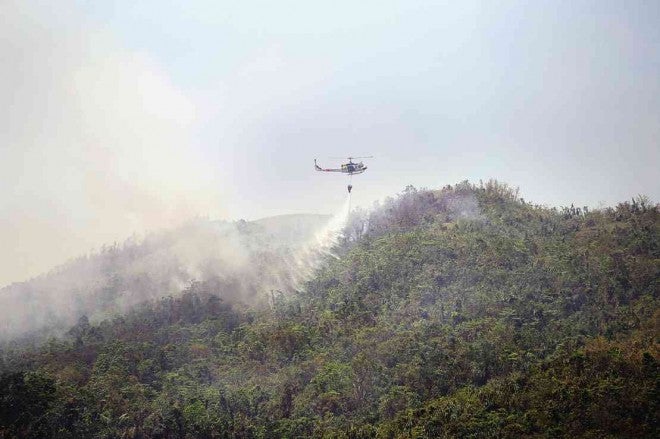 The bush fire in Barangay Tanagan in Bacacay town on Cagraray Island was creeping closer to Barangays Manaet and Malobago, as flames were eating up timberlands, Cedric Daep, head of Albay Public Safety and Emergency Management Office, said in a phone interview on Friday.

Another forest fire raging in Manito town was seen moving toward trees in the Cayaban mountain and destroying reforested areas.

Daep said a bush fire flared up anew in Rapu-Rapu town, affecting a hinterland village of Guadalupe. An earlier bush fire in Rapu-Rapu was doused four days after it broke out on Aug. 1, destroying over 2,000 hectares of farms and grasslands.

Evacuation is not yet  needed for residents in the three areas affected by the fires, Daep said.

Another fire reportedly broke out on Thursday but was immediately put out in Barangay Balading in Malinao town after a fire started by residents to burn their garbage spread to a grassy area.

Daep said a Philippine Air Force helicopter has been dropping water on the areas.

The new fire in Rapu-Rapu started on Friday, destroying at least 2,000 hectares of farms planted with coconuts and other crops.

On Monday, separate fires were reported in Mayon Volcano Natural Park in

Authorities are blaming slash-and-burn farmers for the bush fire in Rapu-Rapu.