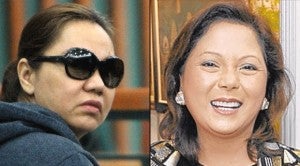 MANILA, Philippines–Businesswoman Janet Lim-Napoles and Atty. Jessica Lucila “Gigi” Reyes, former Chief of Staff of Senator Juan Ponce Enrile, still have not crossed path despite being on the same detention facility and staying in adjacent rooms.

Napoles on Friday said she has neither talked nor seen Reyes. The two are now being held at the Camp Bagong Diwa in Taguig. Reyes arrived weeks ahead of Napoles.

Bureau of Jail Management and Penology (BJMP) Spokesman Aris Villaester said that as much as possible they do not want the two (Reyes and Napoles) to cross paths.

The two who are both facing plunder charges in connection with the pork barrel scam will be moved to another detention facility once its construction is completed.

“They are staying at the livelihood room for the inmates,” Villaester said, saying it is in effect a makeshift jail.

He added that there is also a nurse on standby because they are closely monitoring the health condition of the two.