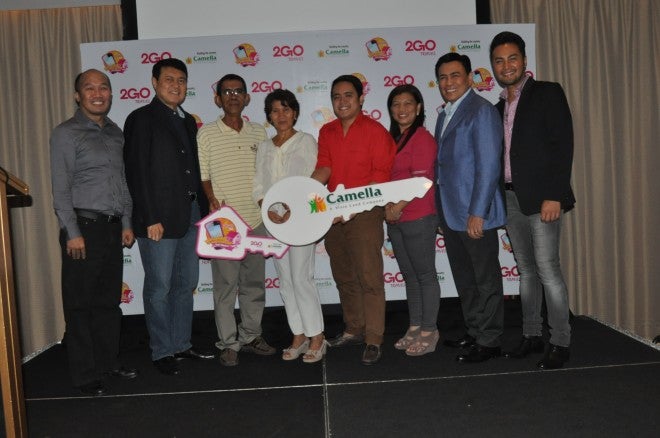 MANILA, Philippines–Two lucky participants of 2Go Travel’s “Maglakbay at Magkabahay Text Promo” were officially named as winners in an awarding ceremony held at the Shangri-La Hotel in Makati last July 31.

During the event, winners Helen Vergara from Iloilo City and Marnelli Lim from San Juan City were handed the Camella “Winner’s Key” as symbol of the Camella house and lot that they will receive later.

The event was graced by no less than Vista Land Inc.’s chairman of the Board, Manuel “Manny” Villar, and 2Go Group Inc.’s president and chief executive officer Sulficio Tagud, Jr.

“Maglakbay at Magkabahay Text Promo” was a text-to-win promo initiated by 2Go Travel and made possible by a partnership with Vista Land Inc.’s Camella.

During her acceptance speech, loyal 2Go Travel passenger Helen Vergara almost broke into tears while sharing that her family was a typhoon victim in 1993. According to the mother of nine, her family still lives in a core shelter in Iloilo up to this day.

In gratitude, Vergara said, “Salamat po. Maraming, maraming salamat po,” while holding the “Winner’s Key” which will open the door to her dream–a house she can call her own.

Marnelli Lim, on the other hand, resides in Metro Manila and is a mother to two kids aged five and two.

When Lim was notified that she won a house and lot, she recalled that she had doubts about the promo. Out of curiosity, she went to a 2Go Travel office to confirm the authenticity of the message she had received.

Lim expressed her gratefulness to 2Go Travel and Camella, saying, “Sana magpatuloy pa po yung ganitong program. At sana marami pa po kayong matulungan (And I hope you get to help more people. I hope programs like this continue).”

Before they move in to their new houses, though, both Lim and Vergara will have to present all necessary documents to Camella Homes first, said 2Go Travel’s marketing and events manager, Ervin Andaya. Then, they will be toured around their chosen Camella Community, and personally, they will select a lot where they want their house to be built, Andaya added.

In the event that a house is already erected on the winner’s preferred lot, they can move in right away after submitting documents, he shared.

To those who didn’t win, don’t fret

But to those who didn’t receive a nod from 2Go Travel this time around, don’t fret as both Villar and Tagud were enthusiastic about teaming up again for another project that has the same essence as the “Maglakbay at Magkabahay Text Promo.” Though they do not plan to replicate the said promo, they are keen about producing a similar promo that will be of help to Filipinos.

“Masaya kami every time may napapasaya kaming pamilya (We are happy every time we get to bring happiness to families),” said Villar.

2Go Travel Assistant Vice President for Marketing Mary Anne Tupas echoed the leaders’ thoughts by sharing that the “Maglakbay at Magkabahay Text Promo” will definitely not be the last massive-in-scale promo of both companies. 2Go Travel passengers and non-passengers alike are advised to stay tuned for other, and perhaps more exciting, promos.