Metro mayors told to bring case vs LTFRB to SC

MANILA, Philippines –“Thick-face”  LTRFB should be  questioned and charged before the  Supreme  Court for its “illegal” order allowing illegal trucks to ply major routes  without consulting other government agencies, Senator Francis “Chiz” Escudero said on Thursday. 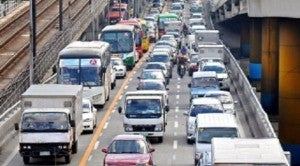 LTRFB is Land Transportation Franchising and Regulatory Board,  which allowed illegal trucks and provincial buses with pending applications with the agency to travel around major routes; and suspended the operations against out-of-line buses.

He said the local government units should not only follow the LTRFB’s order but should also question it before the Supreme Court.

“In fact, dapat kuwestiyunin nila sa korte dahil sa tingin ko illegal yan e. How can you say that you can do something na illegal?”

Escudero said the LGUs affected by the order should   file the case against the LTFRB to reverse what it did.

He also branded the two memorandum circulars issued by the agency  as “flimsy attempts to favor the interests of bus and trucking companies.”

“No one in the right mind should allow colorum vehicles to ply major thoroughfares such as Edsa, C5 and Katipunan. LTFRB should be held liable for these new policies that exacerbated recent Metro Manila traffic, and for draining the patience of motorists and the economy as well,” Ejercito said in a statement.

The senator then urged the LTFRB to focus on its regulatory functions and away from the interests of businesses.