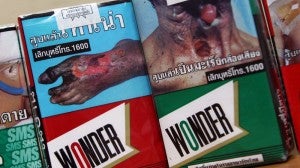 MANILA, Philippines–The Department of Health (DOH) is finalizing the designs of the graphic health warnings to be placed on cigarette packs and released by September, a health official was quoted as saying Thursday.

In a report over Radyo Inquirer 990 AM, Luz Tagunicar, DOH National Center for Health Promotion Supervising Officer, said that the release of the template of graphic health warnings on cigarette packs was in accordance with Republic Act (RA) 10643 or “An Act to Effectively Instill Health Consciousness through Graphic Health Warnings on Tobacco Products” which was signed by President Benigno Aquino III into law last July 15.

Under Section 15 of RA 10643, DOH is given 30 days to release a maximum of 12 initial templates of the graphic health warnings which will be placed on cigarette packs.